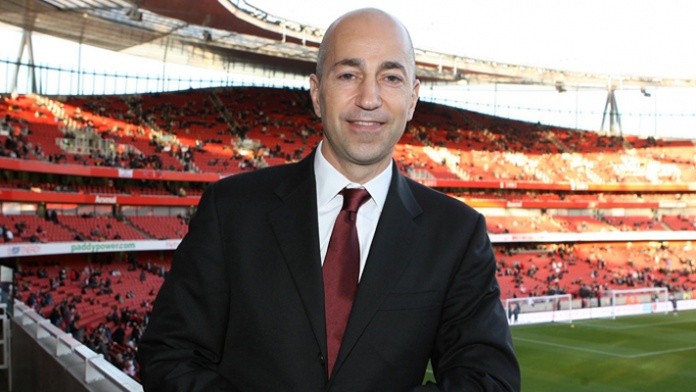 Arsenal midfielder Aaron Ramsey is set to leave the north London club after 11 years for Juventus at the end of the season, and he was given the chance to say goodbye to the fans after Sunday’s 1-1 draw with Brighton and Hove Albion.

An emotional Ramsey couldn’t hide the tears as he bade his goodbyes, and while club legend Ian Wright is sorry to see a great player leave, the former striker is particularly unhappy at the bad business the club have done.

The Welsh midfielder joins the Italian giants for free after agreeing on a move in January, and Wright believes former Arsenal chief executive Ivan Gazidis is to blame for the club’s inability to cash in on the player, given his huge worth.

“Obviously Aaron Ramsey is somebody who never done anything but gave his best for us, you know even with all the stick he used to take, he never ever hid from the ball, always tried to play the way he played, and I’m just pleased that in his last season people appreciate the fact that he was giving everything he could for the club,” the Arsenal legend said on his official YouTube channel.

“And you could see how emotionally he was at the end when it finally kicked in that he’s leaving. I can’t lie, I’m sorry to see him go, I think it’s terrible business by the club because if he was going to go, then see if you can get somebody for him. Because if we’re talking about a summer Unai Emery only has maybe only £45million – it’s the rumour, then for them to not do the kind of business where you get some money for Aaron Ramsey – we’ve seen he is a great player, it’s bad business from the club.

“And I’m not going to blame the current incumbents, you’ve to blame (Ivan) Gazidis, and I’ll firmly lay that at his door. Good luck to Aaron Ramsey, he has been a great servant to our club.”

The Wales international rejected the club’s offer and they weren’t willing to negotiate further as they were not prepared to meet his salary demands.

Ramsey is set to earn over £400,000 a week at Juve, making him the highest-paid British player of all time, and Arsenal loss will surely be their gain given the huge experience and quality the 28-year-old brings to the table.