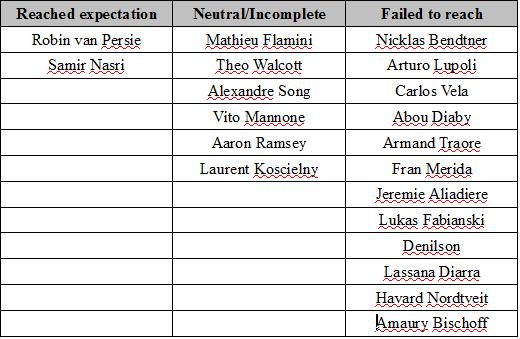 Arsenal’s alleged title drought has taken on alarming proportions. Since the Invincibles of 2004, only the 2005 FA Cup sits in their trophy case as the North London faithful suffer through a rejuvenation period persistently promising – but ultimately failing – to bear fruit. Their weekend draw at WBA, coupled with Champions’ League and FA Cup exits has served to throw the focus upon Wenger and his sometimes effete charges. Ever since the “drought” began, the same flaws have been identified: imitation steel in defense; goalkeepers suffering personality crises; the odd plague of locusts or rivers turning to blood and finally – critically – slightly effeminate hairdos.

The combination of these elements has left Gooners clamouring for defensive reinforcement.

Wenger has not deviated from this youth policy in six years. He’s hardly likely to do so now.

This apparent disdain for acquiring senior, battle-hardened Premiership stalwarts may be part of Wenger’s grand design. Or it could be that his boardroom refuses to pony up for experience and disrepute. The players Wenger has tried to develop into replacements for Ye Olde English Bastards (Adams, Keown and Parlour) haven’t evolved into even adequate facsimiles of former greats and this leaves the Gunners struggling for spine.

Could it be then that the flaw is not in Wenger amassing vast quantities of youth, but how they’ve gone about acquiring that youth in the transfer market? Since the Young Gunners movement began when Patrick Vieira was sold to Juventus, it’s regularly assumed that young British and continental talent flocks to Arsenal to develop into World Class players. But to look at Arsenal’s transfer business since The Invincibles makes for interesting reading (link): much of the costly, highly-touted youth simply hasn’t evolved into the players we all thought they’d be.

All the Arsenal prospects in Table 1 are meet three specific criteria. Since 2004, they are the twenty youngsters bought with high expectations and consequently a significant transfer fee. All have had exposure to the Arsenal first team. They are categorized according to whether they have accomplished what was expected of their potential while at Arsenal. Of twenty highly-rated players, only Robin van Persie and Samir Nasri could be thought of as reaching their potential. The rest – well, there’s hope for Walcott and Ramsey, but it’s fair to say any development from Nicklas Bendtner or Abou Diaby is unlikely given their age and track record. It’s probable they are now the player they will always be.

Pundits and angry fans alike question Wenger’s methods in buying young and sweeping statements like this confirm they have ample reason to. This table obviously forms half an argument, the other side taking the opinion that Wenger’s made solid Premiership players out of players obtained at minimal expense, guys like Emanuel Eboue and Manuel Almunia. Also, Arsenal’s youth system has several exciting teenagers who dazzle the first two rounds of the Carling Cup each year and Jack Wilshere is a full England international at only nineteen.

To suggest this proves a lack of talent for developing youth would be extremely ungenerous. Wenger empowers youngsters unlike most other Premiership managers and this results in Arsenal fielding talent other top clubs would kill for. The failing may therefore not be Wenger’s ability to develop prospects but in his ability to accurately identify buyable talent. Attracting the world’s top youth can only benefit a club and Arsenal have the most enviable reserves of young talent in England. This must prompt Wenger to ask himself – and his scouts – if these players ever really had what it takes to become top class.

A policy of “buy young and relatively cheap; sell old with profit” cannot, in itself, be flawed. The application of that policy, however, can be and is most often severely flawed. Developing talented youth is not easy because it relies on all the backroom staff to be the very best of the best. The talent identification must be the best. The coaching and development staff have to be beyond excellent. The manager, who supervises all, must be both sure of his players and his staff. Somewhere at the Emirates, there has been a breakdown in the Gunner production line as allegedly “can’t miss” players turn into also-rans.

Arsene Wenger chose wilfully to walk down the road of almost absolute youth. Unfortunately, Midas touch and all, he has found himself not walking down a road, but a very thin red-and-white line.