Has anyone seen Arsene Wenger?

Arsenal’s 2-0 win over West Bromwich Albion on Saturday only papered over cracks that are fast becoming chasms.

When a team once talked about as the English Barcelona are reverting to swan dives in order to score goals, something isn’t right.  And it is becoming clearer by the week what that something is.

He no longer bears any resemblance to the man who brought innovation and invincibility to North London.

When he was first appointed in 1996, the question on many fans’ lips was “Arsene who?”

Those not au fait with French or Japanese football saw the appointment as left-field, but with further investigation (and hindsight) Wenger’s CV already looked impressive, in both achievements and football nous.

While Wenger’s first managerial post at French club Nancy was disappointing, what does any manager learn from instant success?  Only that success is easy when it is anything but.

It was in his second job at Monaco that he began to show real promise, winning the league in his debut season.  And while two third-placed finishes followed, it was this failure to recapture the title that ultimately proved the making of him.

In his fourth season in charge of Monaco, he focused more on youth, signing Youri Djokaeff and promoting Lilian Thuram and Emmanuel Petit from the reserve team.  And despite no further league triumphs, he won the French Cup, reached the European Cup Winners’ Cup Final and later the semi-finals of the Champions League.

It was this run of successes and almosts that led other clubs to take notice, and despite a poor start to the 1994-1995 season that saw him leave the principality, Wenger was high on many a chairman’s wish list.

But after eighteen very successful months at Nagoya Grampus Eight, what he ultimately achieved at Arsenal surpassed all expectations.

In just his second season at Highbury he became the first non-British manager to win the domestic double, a huge achievement in itself before you add the fact that Arsenal clawed back a 12-point deficit on Manchester United to secure the league with two games to spare.

And while the following years saw near misses, second-placed finishes and final defeats, Wenger was building something, much as he claims to be doing now.  The difference is back then the fans believed him.

For along with his professorial reputation, he identified talent better than most.

The list of Wenger signings reads like a who’s who of great Premier League footballers from the past: Patrick Vieira, Thierry Henry, Freddie Ljungberg, Robert Pirès, Marc Overmars and Nicolas Anelka to name a few.

And that is without saying how little he paid for them and how much he sold them on for, most notably Anelka – signed for £500,000 and sold for £22 million.

It was these players that formed the bulk of the team that won a second double in 2002, before their undefeated league triumph two years later saw them branded the invincibles. 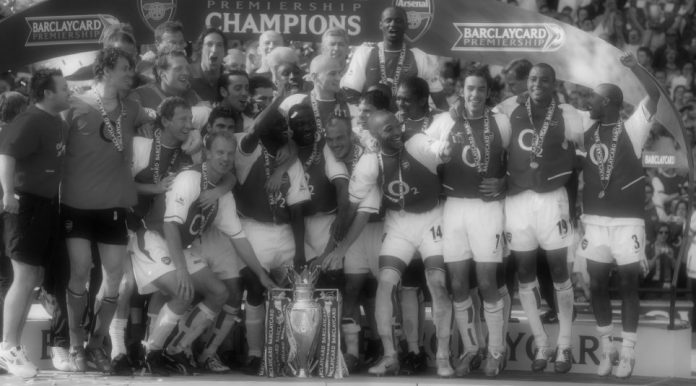 And that may just have been the last sighting of the real Arsene Wenger, because in the eight years that followed, they finished second once, third three times and fourth four times.  And while he used to have the choice of players at their peak, in time they appeared to lose faith in him.

Not instantly.  And a remarkable run to the Champions League final of 2006 pointed to a team still with much to offer.

But if you look at his transfer dealings it could be argued that the summer of 2003 was his last great year.

That was the year he signed Robin van Persie for £2.75 million and Cesc Fabregas for free.

Since then he has signed 48 players, and only eight – Santi Cazorla, Lukas Podolski, Mathieu Flamini, Alex Song, Bacary Sagna, Samir Nasri, Thomas Vermaelen and Alex Oxlade-Chamberlain – are even close to the talent that once arrived at Arsenal on a seemingly-endless conveyor belt.

Wenger has built a legacy.  And in times when football clubs face ruin as a result of greed and over-ambition, Arsenal are a model of good practice.

But that model won’t change with a new man in charge; not if it is the right man.

Fans may point to the fact that Wenger makes his own transfer budget, signing players for pennies and moving them on for considerably more.

But those moves are now the players’ decisions, often to win trophies they don’t feel they can win at the Emirates. Both Nasri and van Persie cited this as a major reason in their decision to leave… but yes, Fàbregas probably just wanted to go home.

Arsene Wenger has done great things for Arsenal.  He is already a legend.  But all his greatest achievements are in the past. Some of them probably need dusting.

The real Wenger isn’t coming back any time soon.  He was left behind in the halcyon days of trophy wins and undefeated streaks.

So it is someone else’s turn now; if they are prepared to take on the challenge.