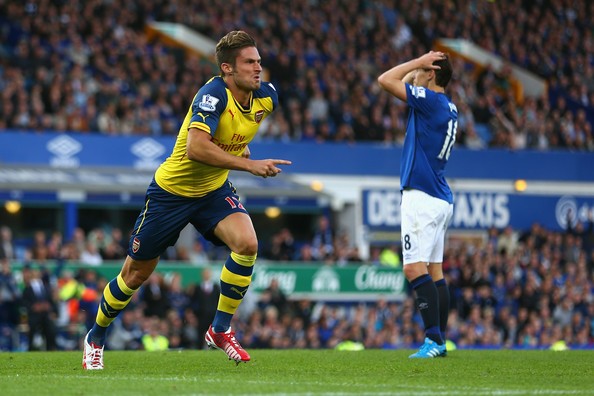 Arsenal’s Olivier Giroud has signed a new contract to keep him at the Emirates until 2018, according to reports.

One should be careful not underestimate the Frenchman’s ability, after all, he is a very, very good centre-forward. He may not achieve the same goal figures as the Premier League’s out-and-out poachers, namely Diego Costa and Sergio Aguero, but he is a custom-fit player for Arsene Wenger’s side.

With the array of world class midfield talent at the club’s disposal, Giroud takes on the perfect role; holding-up the ball, winning the aerial duels and maintaining the quick build-up play with his clever flicks and one touch passing.

Goals are the bread-and-butter of a striker’s game, that’s obvious enough, but even in this department the Frenchman ranks well above the average top flight forward. Last term he scored 16 times in 36 top flight appearances, while weighing in with 37 key passes, as he assisted a further eight goals.

Giroud would have featured far more often this term, had not been sidelined by a broken tibia; a knock that has kept him out of action since the second week of the Premier League season. Despite experiencing just 74 minutes of domestic action prior to this injury, he already has one goal to his name; a header that marked a miraculous comeback at Goodison Park.

The 27-year-old is out until the New Year but is making good progress in his return to fitness. He is now off crutches and wearing a protective boot as he prepares to make his comeback to the first team. Certain quarters had to been calling for Arsenal to buy another striker in the January window, but Giroud’s new contract means the club are far less likely to do so now.

The Frenchman’s new contract is a statement of intent on Wengers’ behalf; a clear indication that he is, one, looking to build for the future, and two, looking to maintain the squad’s current strength in depth, in an attacking sense at least. This is imperative considering the club’s recent history of injuries sustained by key players.

The Gunners head coach clearly values the Frenchman in very high regard and this latest deal provides further evidence of this. One would even go as far as to suggest Danny Welbeck would still be a Manchester United player, had his new strike partner been fit on deadline-day.

Giroud’s new deal is believed to be worth around £80,000-a-week and is reward for an impressive first two seasons at the club. Arsenal are expected to announce the extension within the next few weeks.