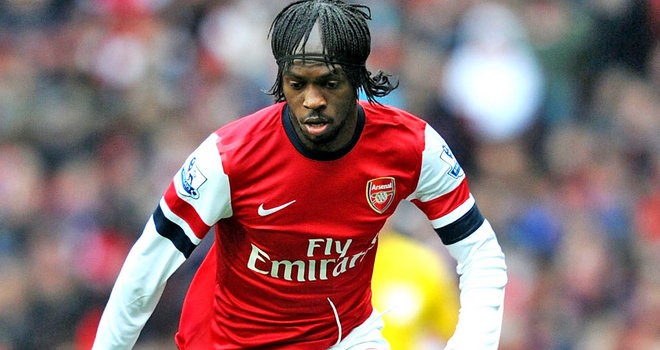 Arsenal forward Gervinho is reportedly within touching distance of completing his move to Serie A side Roma for a fee said to be around £7M.

The Ivory coast international has been at Arsenal for two years – signing from Ligue One side OSC Lille. He made 63 appearances for the London outfit, scoring 11 goals.

Gervinho missed the side’s pre-season tour of Asia, which the club reported was due to sickness.

He hasn’t enjoyed the best of form in the Premier League, and the 26-year old has been linked with a number of sides across Europe this summer as Arsenal look to raise funds for big-money signings.

Roma’s new manager Rudi Garcia managed Gervinho during his time at Lille and is looking forward to his return.

The two sides were previously fighting over the Ivorian’s asking-price. Many were worried Arsenal’s resistance would lead to the Serie A side pulling out of the deal due to lack of funds, but both parties are now said to have agreed.

Gervinho has previously admitted he has regrets over how his time at Arsenal has gone, as he’s failed to force his way into the first-team on a regular basis, and has endured inconsistent form.

He’s hoping a move to Italy is just what he needs to get his career back on track to prove his critics wrong.

Turkish side Fenerbahce, and French sides Lyon and Marseilles have all enquired about the forward this summer, but only Roma appeared willing to pay close to Arsenal’s valuation of him.

Pending a medical, he’s expected to be announced a Roma player in the coming week.

His departure will mean Arsenal have an even larger summer transfer kitty in which to make official approaches for a number of players on their shortlist – £55M-rated striker Luis Suarez being the number one target.