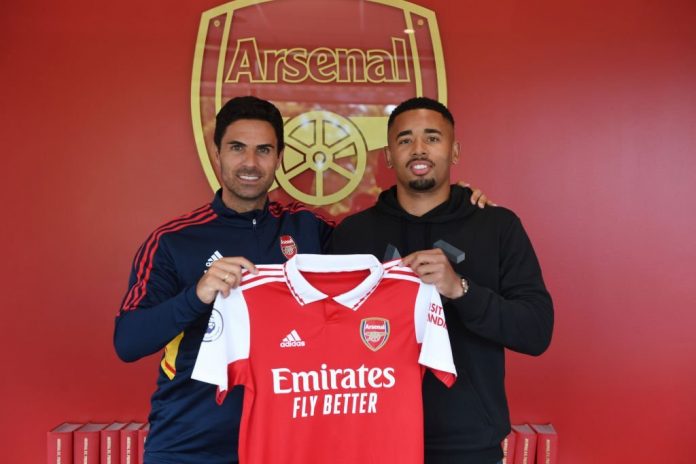 Mikel Arteta’s Arsenal have secured their fourth summer signing in the form of Brazilian striker Gabriel Jesus from Premier League rivals Manchester City for a £45m fee on a five-year deal.

The 25-year-old is a four-time Premier League champion, alongside three League Cups and an FA Cup to his name from his time under Pep Guardiola at Manchester City.

Jesus has scored 19 goals for his country Brazil and is a renowned starter in Tite’s squad, making 56 appearances since 2016 including an Olympic Gold Medal in Rio de Janeiro after beating Germany in the final on penalties.

Speaking about the transfer, Arsenal’s technical director Edu said: “We are delighted that we have secured the transfer of Gabriel. Everyone who knows football well, knows the qualities of Gabriel Jesus.

“Gabriel is a player who we have admired for a long time now. He is 25 years old and an established Brazil international who has consistently demonstrated that he is a player at a very high level. We look forward to seeing him join up with his new teammates ahead of the new season. We all welcome Gabriel to Arsenal.”

Mikel Arteta and Jesus already have a close personal relationship from the Spaniard’s time as an assistant coach at Manchester City under Pep Guardiola from 2016 to 2019. Jesus cited this relationship as a key factor in his decision to join the Gunners.

Arteta couldn’t have been happier to finally get his man and the deal over the line, and added: “I’m very excited. The club has done a tremendous job to recruit a player of this stature. I know Gabriel personally very well, and we all know him well from his time in the Premier League and being really successful here.

“This is a position that’s been on our radar for a long time now and we have managed to get a player that we all wanted, so I’m really happy.”