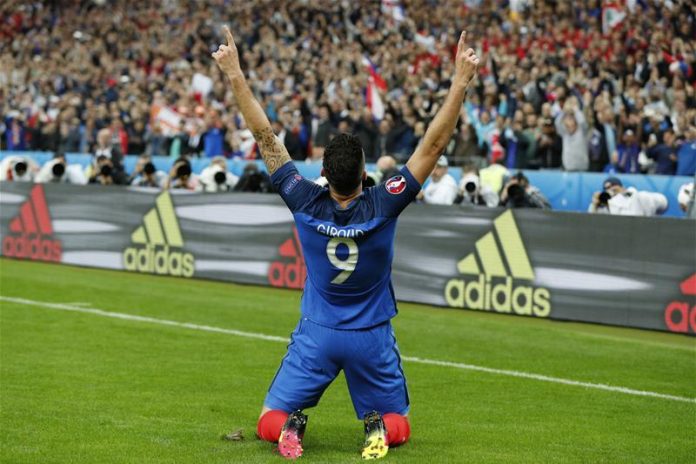 Arsenal striker Olivier Giroud scored twice while Antonine Griezmann, Paul Pogba and Dimitri Payet also got their name on the scoresheet as France beat Iceland 5-2 at St-Denis on Sunday evening to secure their passage to the semifinals of Euro 2016.

Didier Deschamps made two changes to the side that won 2-1 against Ireland in their last match: Samuel Umtiti made his international debut in place of suspended Adil Rami, while N’Golo Kante, also suspended, is replaced by Moussa Sissoko.

After a cagey opening few minutes, France had the first attempt on goal; Dimitri Payet drilled a low 20-yard shot that goalkeeper Halldorsson spilt out in front of him, but grabbed the loose ball in time.

France took an early lead through Arsenal striker Olivier Giroud. Matuidi played a lovely pass over the top of the defence to Giroud, who down the inside left channel scored with an excellent first-time shot. The replay showed that he was slightly offside although the linesman can’t be blamed for that.

Minutes later, Paul Pogba doubled the lead for the home team. Griezmann drilled a flat corner to the far post, Pogba, a £80m reported Manchester United target, with a Ronaldo-like leap scored his first goal of the tournament with a thumping fine header from six yards.

Iceland almost scored again (almost similar to their goal against England) from a long throw. It was a beautifully worked out flat throw from the right by Gunnarsson to Sigthorsson, who headed it dangerously towards the six-yard area. Bodvarsson got to it first but could only lob it over the bar.

Payet with his dazzling feet lofts it from the left to Matuidi who takes a shot from long range but skewed wide. The West Ham midfielder got his third goal of the tournament shortly, with a precise low shot with his left foot into the far corner.

And the evening got better and better for France when Griezmann made it 4-0 with a classy dink over the top of the keeper before the half time. Incidentally, his strike was the 100th goal of Euro 2016 while France became the 1st team in Euros history to score four goals in a first half.

The game was played at a frantic pace and France were in no mood to drop down their tempo after the break. Griezmann was tackled inside the box; the loose ball came to Payet, who sliced a half-volley high over the bar.

Iceland have shown great fighting spirit throughout the tournament and they pulled once back through Sigthorsson, who moved quickly across his marker and finished home with ease.

Their joy was short lived as France scored again to maintain their four-goal lead. Arsenal striker Giroud scored his second of the night with a fine header off Payet’s set-piece.

Iceland have won the hearts of the neutrals. Not for a moment, their heads dropped and their fighting spirit has been so impressive. Skulason played an excellent deep cross from the left and Bjarnason scored the second goal for Iceland with a precise header.

Griezmann in the no 10 role has been at the heart of most of the creative moves for France. The Atletico forward lays off Sissoko into the box with a lovely angled pass but the Newcastle midfielder blazed it over the bar.

With that victory, France are through to the semifinals where they meet the World champions Germany on July 7th in Marseille.