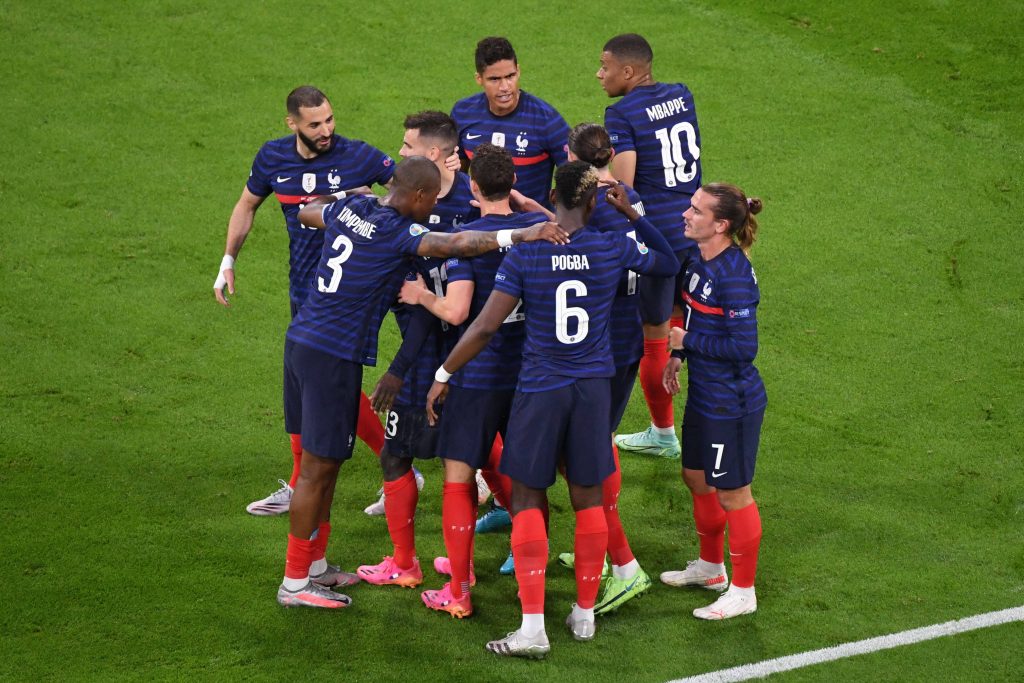 France won their opening game of Euro 2020 on Tuesday, defeating Germany 1-0 thanks to a Mats Hummels own goal.

It was a strong start by the world champions, who twice came close to taking the lead in the first 20 minutes.

Paul Pogba headed over from Antoine Griezmann’s corner, and Kylian Mbappe had a shot well saved by Manuel Neuer.

And it wasn’t long before Les Bleus took the lead. Pogba was once again involved, floating a lovely ball over to Lucas Hernandez.

The Bayern Munich man drilled a low cross into the box, and Mats Hummels sliced into his own net.

Germany responded with a couple of efforts of their own. Thomas Muller flicked a header wide from Robin Gosens’ cross, and Ilkay Gundogan scuffed his effort after being set up by Serge Gnabry.

But they couldn’t clinch an equaliser before half time, ensuring that France went in at the break 1-0 up.

They had a chance to double their lead early in the second half when Mbappe slipped the ball through to Adrien Rabiot.

The Juventus man had Griezmann available for a square ball but opted to shoot and hit the outside of the post.

Not long after, Germany almost got an equaliser. Gosens clipped in a cross for Gnabry, but the winger’s volley bounced over the crossbar.

Midway through the second half, Mbappe thought he had opened his account for the summer after he curled home a brilliant finish off the post.

However, the linesman’s flag stopped the celebrations, and replays confirmed that he was just offside.

The youngster continued to threaten and showcased his devastating pace up against Hummels. The Paris Saint-Germain forward burst past the defender and got into the box.

Hummels was forced into a challenge and managed to get a touch on the ball. However, he appeared to go through Mbappe to get to it. Nonetheless, the referee waved away the penalty appeals.

France had the ball in the back of the net once again, this time through Karim Benzema.

Pogba played a pass through to Mbappe, who squared to the Real Madrid striker for a tap in. But VAR intervened after replays showed that Mbappe was offside in the build-up.

That was the last piece of action of the night, ensuring that France ended the game with three points.

They go second in the group behind Portugal, who defeated Hungary 3-0 earlier on.

Hugo Lloris (6/10) – Did well when called upon, claiming crosses and playing out from the back. Not forced into any saves of note.

Benjamin Pavard (7/10) – A lot of the German threat came down his side, but he didn’t buckle under pressure. Made a brave clearance to deny Gosens a tap in.

Presnel Kimpembe (7/10) – Effectively nullified the threat of their opponents, not allowing them any clear cut chances.

Lucas Hernandez (7/10) – A great run for the opening goal. Rarely beaten down his side when defending.

N’Golo Kante (7/10) – Energetic as ever, making several tackles and interceptions.

Paul Pogba (7/10) – Best player on the pitch in the first half. Lost control in midfield as the game went on.

Adrien Rabiot (5/10) – Stuck out like a sore thumb amid France’s high-quality midfield. Squandered a great chance to make it 2-0.

Antoine Griezmann (6/10) – Showed some quality on the ball with a few nice touches. Didn’t do enough in the final third.

Kylian Mbappe (7/10) – A constant threat with his pace. Unlucky to have a superb goal ruled out due to a marginal offside.

Manuel Neuer (6/10) – Good with his distribution. Didn’t have many saves to make.

Mats Hummels (4/10) – Terrorised by the pace of Mbappe, and on another day may have conceded a penalty. Horrible slice for his own goal.

Antonio Rudiger (6/10) – Did well against Benzema. Bizarrely appeared to bite Pogba just before half time.

Ilkay Gundogan (6/10) – Didn’t often get the better of Pogba and Kante. Missed a good chance in the first half.

Robin Gosens (7/10) – Lively down the left and unlucky not to have a couple of assists.

Kai Havertz (5/10) – A quiet game for the Chelsea man, who rarely looked like scoring before being subbed off.

Thomas Muller (4/10) – Did pretty much nothing right in the box. Link up play and passing was poor. Headed a good chance wide.