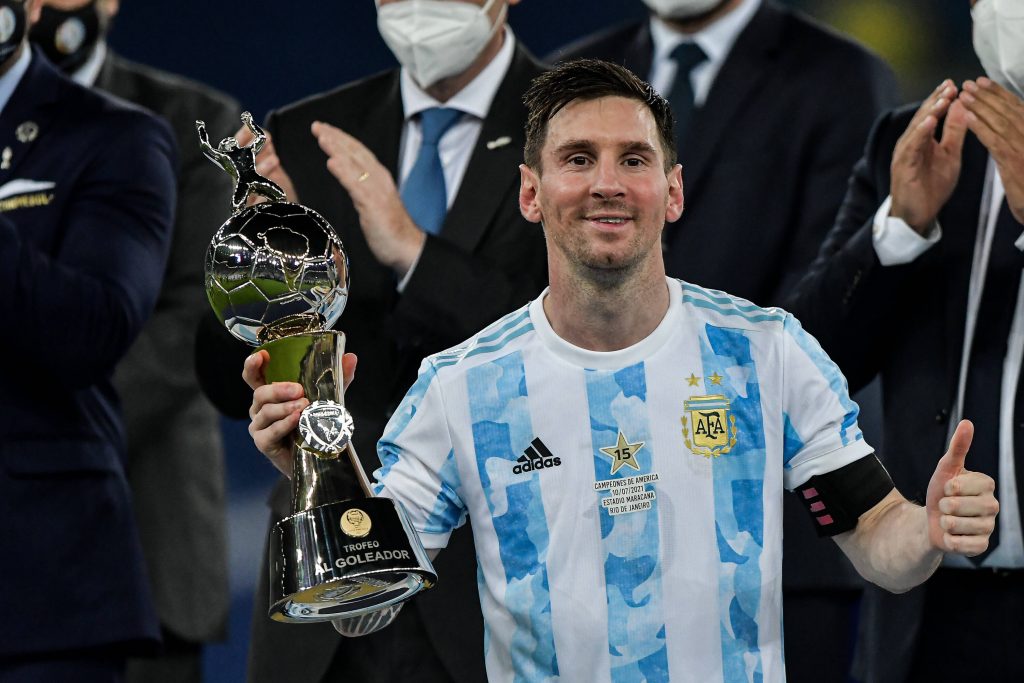 The 2020/21 season has officially come to a close, and it’s around this time when we start to speculate about our award winners.

The Ballon d’Or is the most high profile individual award in the game, recognising the world’s best player from the past 12 months.

With the season over, we’re now looking at our potential winners.

Two months ago, we compiled a list of the leading candidates for the prize. Since then, we’ve had a Champions League final and a summer of international football.

Some of the list has aged well. Other parts….not so much (whose idea was it to give Antoine Griezmann an honourable mention?).

Anyway, two months on, and we now have a clearer picture of who our 2021 Ballon d’Or winner could be.

As things stand, Messi looks nailed on to secure the seventh Ballon d’Or of his career.

It’s not been the easiest season of the Argentine’s career at club level. Barcelona fell short in La Liga and the Champions League.

Nonetheless, he secured himself the Pichichi for the fifth year in a row.

But it was in the summer when he really staked his claim for the award. As captain, he led Argentina to the Copa America trophy – the first of his career and the country’s first major trophy since 1993.

Individually, Messi was brilliant for La Albiceleste. He topped both the goals and assists charts, scoring four and setting up five.

These performances earned him the Player of the Tournament award to go with the trophy.

All things considered, it isn’t easy to see anyone else winning it.

Perhaps one man who can feel aggrieved is Robert Lewandowski. Having missed out on the award in 2020 due to its rather unfair cancellation, he will have felt like he had a good chance this time around.

As an individual, he had arguably the best season of his career. He broke the record for most goals in a single Bundesliga season, netting 41 in 29 appearances, and added three more at Euro 2020.

Unfortunately, he may not have the trophies to back it up. Winning the Bundesliga with Bayern Munich is unlikely to attract many votes, and the Bavarians didn’t win anything else major.

Lewandowski himself was unlucky to have exited the Champions League early, having missed their quarter-final tie with Paris Saint-Germain through injury.

As for Euro 2020, the forward was part of a side eliminated in the group stages. He did pretty much all he could to drag them through, scoring three times, but this ultimately proved not to be enough.

The Ballon d’Or is an individual honour. In theory, team achievements shouldn’t come into it. But this isn’t really the case. It’s harsh, but the Pole will probably miss out again.

On the opposing side of that coin, there’s Jorginho, who has recently become an outside shout for the prize.

While Lewandowski’s chances have been harmed by his team’s failures, Jorginho has risen to prominence largely thanks to the trophies he has won with Chelsea and Italy.

He lifted the Champions League back in May and emerged victorious at Euro 2020.

But that’s not to say he hasn’t had a good year individually. He was one of the standout performers at the European Championships and was a regular starter for Chelsea.

He deserves a lot of recognition for his displays. But the Ballon d’Or shouts are a bit far fetched.

Where did others go wrong?

Looking back on that top ten list from May, one pick stands out – Kylian Mbappe in the number one spot.

Back then, he was the frontrunner. Now, he’s pretty much out of the question. So what changed in the last two months?

Well, following the hype of his stellar performances against Barcelona and Bayern Munich, he failed to fully push on from this.

He didn’t make much of an impact against Manchester City in the Champions League semi-finals and could not win anything other than the Coupe de France with PSG.

But where he really lost it was at Euro 2020. With the world expecting him to do great things, he underperformed, failing to score a goal and missing the decisive penalty in the shootout defeat to Switzerland in the round of 16.

Then there’s Cristiano Ronaldo, who is somewhat in the same boat as Lewandowski. He did his part, winning the Golden Boot in both Serie A and Euro 2020. However, for his extraordinary standards, this isn’t enough.

Before Sunday’s final, some believed that Harry Kane could get himself into the conversation if he ended up on the winning side.

He enjoyed an exceptional Premier League season, winning the Golden Boot and the Playmaker Award.

All that was missing was a trophy. But, having walked off the pitch with a silver medal, he has no chance.

At one point, N’Golo Kante’s campaign for the Ballon d’Or was getting a lot of traction. He had won the Man of the Match award in both legs of the Champions League semi-final and the final.

If France had gone further in the tournament, he may well have won it. But the hype seems to have died down around the midfielder.