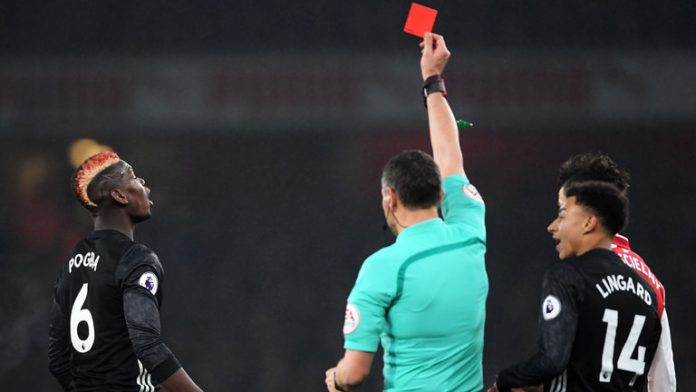 It’s as you were at the top of the Premier League, with the top three teams all recording victories over the weekend.

Paul Pogba’s red card at Arsenal, Sam Allardyce’s winning start with Everton and Manchester City’s ability to grind out results were amongst the main areas for discussion from the latest round of games.

Sportslens takes a look at the five main talking points from the weekend:

Just two weeks ago Hector Bellerin was telling everyone how wonderful Arsenal were after their victory over Tottenham Hotspur.

Fast forward to Saturday and Bellerin might have wished he’d kept his mouth shut as Manchester United ruthlessly exposed the Gunners’ defence.

The full-back’s role in Paul Pogba’s dismissal was also questionable, with his half-baked attempt at a tackle making it impossible for the United star to avoid catching him.

Laurent Koscielny’s reaction didn’t do Pogba any favours either, and the whole incident left the feeling that this Arsenal side are a bunch of softies.

Big Sam wondering what the fuss was about

Everton fans gave Sam Allardyce a lukewarm reception as he took charge of the team for the first time against Huddersfield Town on Saturday.

However, Goodison Park was rocking at the end of the game as Big Sam’s new team recorded a fully-deserved 2-0 victory.

The Toffees are already up to tenth in the Premier League, just seven points behind Spurs, and Allardyce can be expected to push them even higher as the season progresses.

It doesn’t seem that long ago that Spurs were being talked up as potential title challengers, but they are now 18 points behind Manchester City after Saturday’s 1-1 draw at Watford.

Mauricio Pochettino’s have now conceded the opening goal in each of their last five matches and they appear incapable of keeping clean sheets at the moment.

A seven point gap to third-placed Chelsea looks big given Spurs’ recent league form and a victory against Stoke City next weekend is vital to keep their hopes of a top-four finish alive.

Philippe Coutinho was blocked from moving to Barcelona last summer, and Liverpool will be hoping his head isn’t turned again during the upcoming transfer window.

Coutinho was impressive as the Reds cruised to a 5-1 victory at Brighton, with the hosts unable to cope with his movement and passing.

His free-kick for Liverpool’s fourth was excellent and in this sort of form it’s easy to see why Barca are so keen to sign the Brazilian playmaker.

Man City have plenty of character

City have received plenty of praise for their free-flowing football, but they’ve also shown they can grind out results over the last couple of games.

The Blues still have an eight point lead over United and next Sunday’s derby game at Old Trafford could go a long way to deciding the destination of this season’s title.