This summer will be massive for Manchester United. The club will probably appoint a new manager and he would be given a hefty transfer war-chest to bolster the squad.

Recently, Manchester United have been linked with a move for Barcelona midfielder Cesc Fabregas. Again. Readers will remember that United were heavily interested in him last summer and they had two bids rejected as well.

However, situation is bit different now. And we take a look at five major reasons why Manchester United should sign him.

Manchester United not only need a central midfielder, but they need someone of world class material. Fabregas is world class and would fit in at any team in this world. He is way better than any midfielders Manchester United have in their ranks. At Barcelona, he is often used in a more advanced role but he will be given his favoured role at the Old Trafford. 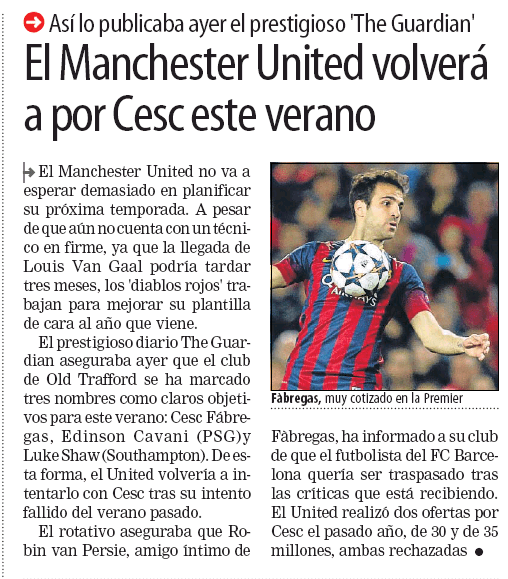 This is an added advantage Fabregas has over other midfielders, who are targeted by Manchester United. He spent eight years at Arsenal before moving to Barcelona. So, his invaluable experience would come handy.

Fabregas became the captain of Arsenal at a very young age. He is not vocal unlike many other skippers but he leads by examples. Though he may not be given the captain’s armband at United, but he can earn immediate respect and command on the pitch.

I’m not saying Fabregas should be signed to appease the fans. No. A signing should be done only if it is deemed necessary. Not only his signing will galvanise the dressing room but it will serve as a huge statement as well that despite not offering Champions League football, the club can still attract top quality players.

And finally, he is unsettled

Fabregas has come under lot of criticism this season for his performances and even majority of the fans hold the opinion that he should be sold. Also, Mundo Deportivo reports that Barcelona are already plotting a move for Bayern Munich midfielder Javi Martinez, which could pave the way for Fabregas’ departure.

He has a contract till 2016. So, naturally he won’t be available in cheap. The transfermarkt.com feels his current value is something in the region of €50m, but Catalan club will be eager to conduct any business for €30-40m, which I think should be a fair amount to lure Fabregas away.