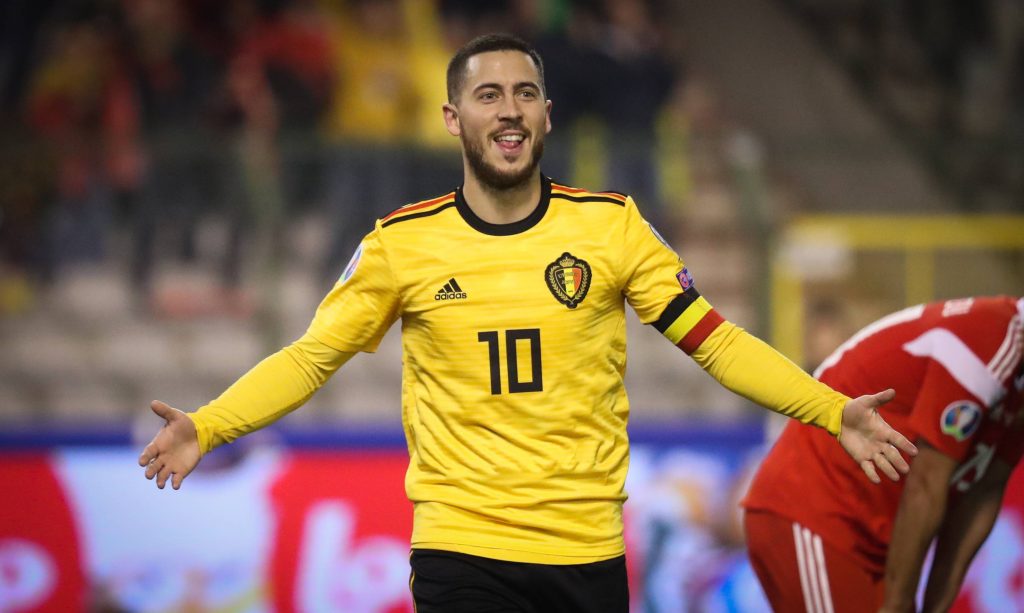 Group B kicks off at Euro 2020 next week, and it’s shaping up to be an exciting set.

Belgium head into the tournament as favourites, boasting several world-class players. However, they cannot afford to underestimate their opposition.

Denmark have been tipped by many as possible dark horses for the tournament, while Belgians remember what Wales did to them five years ago.

And then there’s Finland, who enter their first-ever major tournament this summer.

Here’s one player from each Group B side to look out for this tournament.

Belgium enter the tournament with some of the world’s most in-form players. Kevin De Bruyne, Romelu Lukaku, Thibaut Courtois – all among some of the best in the world in their positions.

And, up until recently, Eden Hazard was considered the best of the lot. The tricky winger was a star in the Premier League at Chelsea, winning PFA Player of the Year once and earning a nomination four other times.

However, since his nine-figure move to Real Madrid in 2019, things have gone downhill. He has scored just four goals in all competitions since transferring to the Bernabeu Stadium and has become increasingly unpopular with the fans.

You don’t lose all that talent overnight. Whatever ability Hazard had at Chelsea, he still has.

Euro 2020 could be his chance to prove that he’s still a superstar. A good tournament could get him back in favour at Madrid – especially with new manager Carlo Ancelotti arriving. Or, it could prompt another top team to take a gamble on him.

Christian Eriksen is in a similar boat to Hazard. Once considered one of the finest playmakers in the world, the Dane’s stock has fallen drastically over the last two years.

His recent performances have been a bit more encouraging, as he helped Inter Milan lift a first Serie A title since 2010.

But he’s still not the player he was at Tottenham Hotspur. In fact, he failed to register an assist all season.

Nonetheless, he will still be the main man for Denmark this summer. With Pierre-Emile Hojbjerg and Thomas Delaney in midfield, Kasper Hjulmand’s side should not be underestimated.

It could be a tournament of personal significance for Eriksen, too. Just one goal would see him climb to sixth in the list of Denmark’s all-time top goalscorers – drawing level with Michael Laudrup – while two will take him into the top five.

It’s no secret who Finland’s main man is. Just ask anyone who played Premier League Fantasy Football in the 2019/20 season.

Teemu Pukki has been prolific over the last three seasons, bagging 67 goals in 126 appearances since signing for Norwich City in 2018.

This includes strikes against some of the best defences in the world, such as Liverpool and Manchester City.

If Finland are to stand any hope of progressing past the group stage, they will need the 31-year-old to be at his best.

Like Eriksen, Pukki could hit a significant milestone this summer. Two goals will take him level with Jari Litmanen as the all-time top goalscorer for the Finland national team.

As hosts, Russia enjoyed a fairly successful World Cup, reaching the quarter-finals before being eliminated by finalists Croatia on penalties.

One of the main men from their 2018 adventure was Aleksandr Golovin, who received widespread acclaim for his performances in central midfield.

He recorded a goal and two assists at the tournament, earning himself a transfer to Monaco for an estimated £27 million fee.

The midfielder has had a solid time in Ligue 1, helping his side achieve Champions League qualification this term with five goals and nine assists from just over 1000 minutes on the pitch.

If he can produce a similar output this summer, he will be vital to his country’s ambitions.