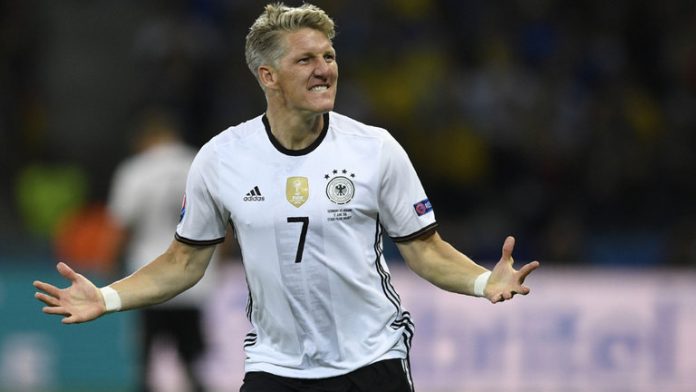 The 2014 World Cup winners began their 2016 Euro campaign with a 2-0 win over Ukraine at Lille on Sunday night, although Joachim Leow’s side had been far from convincing.

This is a side that has undergone a massive change, tactically, over the years. Six years ago, at the 2010 World Cup in South Africa, Germany displayed an excellent demonstration of counterattacking football.

In the quarter-final clash against Argentina, Germany emerged 4-0 victorious. On that day, they only had 39% possession. The emphasis now has been shifted to a more possession based football. On Sunday, Germany had an impressive 68% possession in the match, but they are not a fluent goal scoring side like what they once used to be.

Germany took the lead in the 19th minute when Toni Kroos’ free-kick was headed home by Valencia defender Shkodran Mustafi. The Germans started the game brightly, but their reckless gung-ho approach to attack drew counter threats from Ukraine.

The Germans midfielders continuously pressed high up in the midfield leaving pockets of space for the opposition to exploit. Julian Draxler didn’t track back enough to support the wing-back, while left back Jonas Hector was left unprotected as he cried out for support on the left-hand side.

Ukraine constructed some good moves through wide players, Yehven Konoplyanka and Andriy Yarmolenko, and Manuel Neuer’s services were required on the night more than once.

In the second half, Germany responded with a more conservative approach. Leow urged his players to slow down the tempo and focussed on dominating the midfield, with Real Madrid’s Toni Kroos totally bossing the game with his metronomic presence. He completed 112 passes with a staggering 93% accuracy, had 129 touches and created five scoring chances for others.

The best feature of this German side is they are not one dimensional and are still capable of punishing a side through smart counter attacks. With little over a minute to go, Ukraine pushed men forward in search of an equaliser. The move broke down quickly and Germany initiated a fast move through Arsenal superstar Mesut Ozil. The Arsenal playmaker composed himself and delivered a peach of a pass that Manchester United’s midfielder Bastian Schweinsteiger slotted home. It was his first goal in five years for his country.

The victory ensured Germany kept their long-running record of never losing its first match at the Euro intact, with Die Mannschaft remaining unbeaten in twelve opening matches in Euro’s history.

Poland opened their Euro campaign with a 1-0 win over Northern Ireland that wasn’t exactly convincing. They deserved the victory but the scoreline could have been a lot better had they converted their chances.

Adam Nawalka’s team are considered in some quarters as the surprise package of Euro 2016 and they certainly have enough firepower to cause any team problems. Apart from a late spell of pressure from the Northern Irish, the Polish defenders were kept quiet throughout.

But they showed enough glimpses of their vast potential  attacking wise, although they need to sharpen their finishing skills if they’re really serious about going further in this tournament.

The strike partnership of Robert Lewandowski and Arkadiusz Milik gave the Irish defenders a torrid time in the middle, although the Bayern Munich striker was kept relatively quiet.

Despite all their technical superiority and dominance in possession, the Polish couldn’t find the opening goal going into the break. Milik got himself into a good position, not once but twice, from where he had the goal at his mercy, but on both occasions failed to hit the target.

But the young Ajax striker wasn’t going to fluff his chances forever. In the 50th minute, when Jakub Blaszczykowski presented him with a glorious opportunity, he made no mistake, this time, slotting the ball into the bottom corner.

The Real Madrid midfielder doesn’t score too often but he has this habit of scoring stunning goals from time to time. A great technician, and arguably the best central midfielder in the world at the moment, Modric ran the show as Croatia defeated Turkey 1-0 on Sunday. Check the goal below:

If anything positive came out of Switzerland’s 1-0 win over Albania in their opening match was the performance of the midfield trio of Xhaka, Dzemaili and Xherdan Shaqiri. They created no less than eight chances between them, with Xhaka completely dominating the game with most no. of passes (115), touches (127) and the joint-highest number of chances created (3) in the game.

The Swiss midfielder joined the Gunners for a reported fee of £30m this summer, and it seems everyone is convinced that Xhaka will be a great hit at Arsenal.

“I think he won’t have a problem,” the Hamburg centre-back told ESPN FC. “He’s a top-class player with lots of qualities. I think he’ll do Arsenal a lot of good.

“It’s a team with a lot of talent and a lot of class. There’s people like [Francis] Coquelin and [Santi] Cazorla — there’s huge competition — but I’m sure that he has the quality to impose himself.

“He brings calmness, his ability to play long passes, precision and aggression.”

Xhaka’s Swiss teammate Valron Behrami believes the midfield’s abrasive style is more suited to the Premier League and that he would do well for the Gunners.

“Sometimes his physicality in Germany was even considered too much. The first time I saw him after the signing [for Arsenal] I said: ‘Now you’re not going to get so many yellow cards.’ Of course it’s not easy,” the 31-year-old said. “The first two or three months you need a bit of time but he is prepared for a team like Arsenal.”