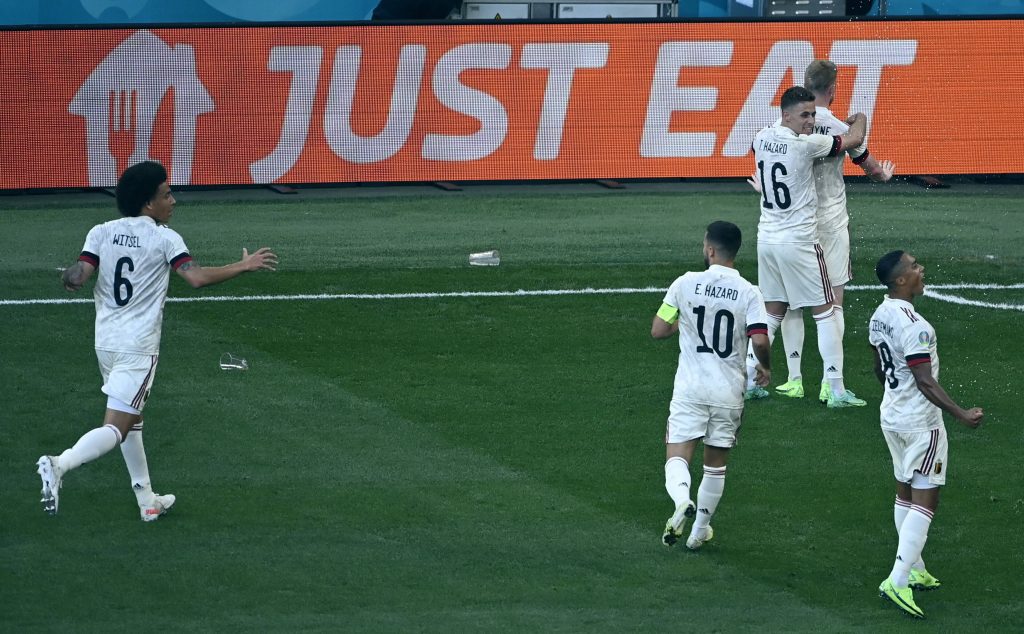 Belgium came from behind to defeat Denmark in a thrilling Group B match at Euro 2020 on Thursday.

It was the perfect start by Denmark, who took the lead after just two minutes. Jason Denayer’s pass was cut out by Pierre-Emile Hojbjerg, who slipped the ball through to Yussuf Poulsen.

The RB Leipzig man coolly rolled the ball into the bottom left corner to open the scoring.

Both sides had chances within the next five minutes to add to the scoresheet. Belgium came close when Youri Tielemans’ cross was glanced towards goal by Dries Mertens, but straight at Kasper Schmeichel.

Meanwhile, Denmark had three chances in quick succession to double their advantage. Joakim Maehle almost forced his way through but was smothered by Thibaut Courtois, and Martin Braithwaite also came close.

Maehle was influential again seconds later, crossing for Daniel Wass, but his header was comfortably saved.

On the tenth minute, there was a touching tribute to Christian Eriksen, who had suffered a cardiac arrest in the previous game.

Belgium stopped playing, and the players and fans all stood and applauded in honour of the playmaker.

The rest of the half was fairly quiet, with Denmark looking more likely to get the next goal. Mikkel Damsgaard jinked into the box but placed his effort narrowly wide of the far post.

Roberto Martinez introduced Kevin De Bruyne at half time after a blunt opening 45. The two-time PFA Player of the Year winner had been absent from the tournament so far with a facial injury, but he showed no signs of rustiness, making an immediate impact off the bench.

It was the Manchester City man who assisted an equaliser for Belgium. Romelu Lukaku got down the left and found De Bruyne in the middle, and he picked out a splitting pass for Thorgan Hazard to tap home for 1-1.

Again Lukaku was involved, producing some exceptional footwork to escape a tight corner. Thorgan Hazard and brother Eden then played a one-two before the latter set up De Bruyne to slam in at the near post.

This didn’t deter Denmark, and they spent the final 20 minutes pressing for an equaliser. Substitute Andreas Cornelius knocked a ball down for Braithwaite, whose low shot was palmed away by Courtois.

With injury time approaching, the Red Devils were clinging on to their lead and twice came close to conceding a late equaliser.

Braithwaite saw his header clip off the bar after Andreas Olsen’s cross, and Mathias Jensen powered a strike just wide of the post.

But Belgium held out for their second win from two in the tournament, sealing their place in the knockouts.

By contrast, Denmark are still yet to register a point. They will need a win against Russia to stand a chance of reaching the round of 16.

Kasper Schmeichel (6/10) – Didn’t have many saves to make. Perhaps could have done better with De Bruyne’s goal.

Daniel Wass (6/10) – Defended well against Carrasco and always looked to get forward. Subbed on 62 minutes.

Andreas Christensen (6/10) – Can’t really be blamed for either goal. Had a solid game.

Simon Kjaer (7/10) – Deafened Lukaku in the first half, but let the Inter Milan forward get the better of him a few times in the second half.

Jannik Vestergaard (5/10) – Had a good first half but made an error in the build-up to the equaliser.

Joakim Maehle (6/10) – Provided a lot of attacking threat. Both goals came down his side, which he will be disappointed with.

Mikkel Damsgaard (7/10) – Produced some lovely footwork in the middle of the park and always looked threatening. Booked in the second half for a dive.

Pierre-Emile Hojbjerg (7/10) – Fantastic in the first half, especially to win the ball for the goal. Found things harder in the second up against a star-studded midfield.

Thomas Delaney (6/10) – Had a good first half but struggled after the introduction of De Bruyne.

Martin Braithwaite (7/10) – Gave Vertonghen a tough time with his pace and always worked hard. Hit the bar late on but was sometimes wasteful in the box.

Thibaut Courtois (6/10) – Didn’t have much chance with the goal. Did fine whenever called upon.

Toby Alderweireld (6/10) – Won most of his battles but didn’t always have it easy against the Danish front two.

Jason Denayer (5/10) – Lost the ball in the build-up to Poulsen’s goal. Didn’t make the most of his recall to the starting XI.

Jan Vertonghen (5/10) – Really struggled up against the pace of Braithwaite. His age was showing.

Thomas Meunier (5/10) – Failed to deal effectively with the threat down his side. Also didn’t do much going forward.

Leander Dendoncker (5/10) – Struggled to cope against the Danish midfield. Subbed on 58 minutes.

Youri Tielemans (7/10) – Was the best of a poor bunch for Belgium in the first half. Helped control the second half

Thorgan Hazard (7/10) – Got in the right position to equalise and linked up with his brother for De Bruyne’s goal.

Dries Mertens (4/10) – Had one chance early on but was anonymous otherwise. Subbed off at half time.

Romelu Lukaku (7/10) – Hardly got the ball in the first half. Came to life in the second, contributing to both goals.

Yannick Carrasco (5/10) – A quiet game from the winger. Substituted before the hour mark.

Kevin De Bruyne (9/10) *MOTM* – Completely changed the game after coming on at half time. Got a fantastic assist and a brilliant winner.