The Czech Republic national team may not be the favourites going into Euro 2012 but they have plenty to prove after missing out on 2010 World Cup qualification. After reaching the semifinals of Euro 2004 they have failed to get back the group stages of any competition.

Having said that, they’re placed in an evenly-matched Group A including Poland, Greece and Russia, and will fancy their chances of progressing to the quarterfinals.

Below you’ll see the brand new home and away football shirts of the Czech National Team which will be worn in the Euro 2012 tournament finals.

The new Czech Republic soccer jerseys are manufactured by Puma.

The Czech Republic home kit is the traditional red with a blue base surrounding the country crest. The shirt has a white trim around the color with a blue trim at the inside / back of the neck.

This is the official Czech Republic Euro 2012 football shirt which will also be worn in the qualifying campaign for the next World Cup. 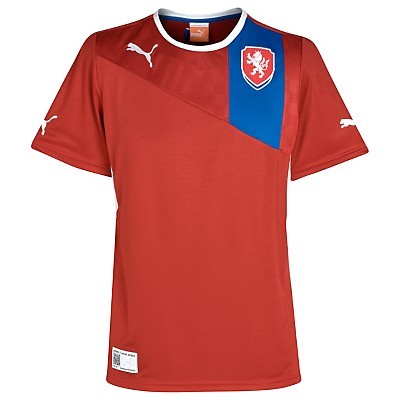 The Czech Republic 2012 Away kit is a white number with blue trim on the sleeves and red trim around the collar. As with the home shirt above, this is the official Czech Republic away shirt that will also be worn in their 2014 World Cup qualifying campaign.

Click here to buy the new Czech Republic away jersey. 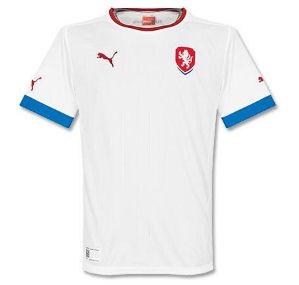