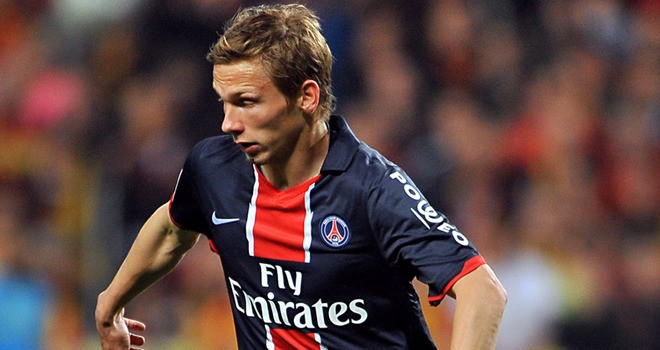 France international Clement Chantome has been making a name for himself for Paris Saint-Germain. The long-serving 25-year old came through the ranks with the Ligue 1 title holders and is now an established first-team player.

His form has seen him the subject of interest from a number of sides across Europe, but his next destination could well be the Premier League. Arsenal, and Everton are among the sides who have recently been keen to procure the midfielder’s signature.

No official bid has been made for Chantome, who is valued at £5M, but Paris Saint-Germain are expecting interest during pre-season.

Making 28 Ligue One appearances last season, the Frenchman played a part of PSG’s title-winning campaign. However, he is said to be looking for a new challenge next season, and his side will let him go for the right price. He featured 12 times from the bench, and wants to find a side willing to give him more first-team opportunities.

Everton and Arsenal look set to lock heads over Chantome this summer, and are expected to host talks with Paris Saint-Germain over his availability.

The 25-year old wants to add to his only cap for the France national team in time for the 2014 World Cup at the end of season. He’s long been a fan of the Premier League and is said to favour a potential move to England more than any other nation.

While PSG rate Chantome highly in the squad, they are going in a different direction regarding their transfer targets. It’s too competitive for a place in the side for fringe players – with the emergence of central midfielder Marco Verratti as an example. The Ligue One champs can’t promise the French midfielder regular starts next season – meaning he may have to consider offers elsewhere.

Will the Premier League be his next destination?