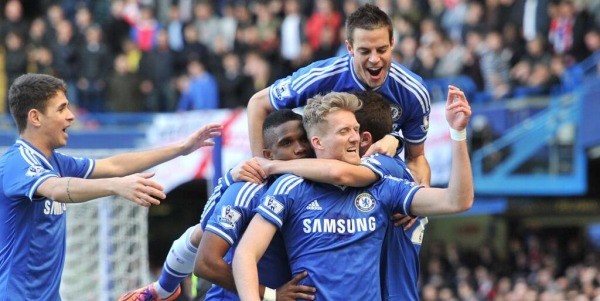 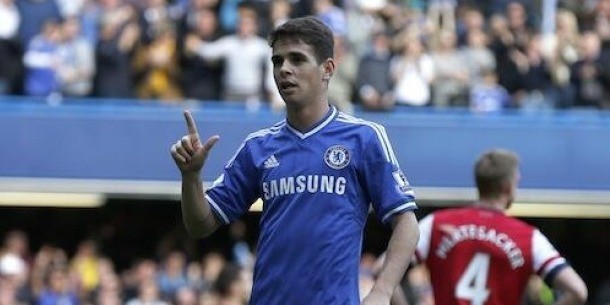 It was meant to be a day of celebration for Gunners boss Arsene Wenger, who reached his 1000th game in charge of the club, and no-one could have predicted such an overwhelming scoreline in favour of the Blues, with Jose Mourinho extending his unbeaten home run in the league, and simultaneously keeping his French counterpart without a win against him in eleven attempts.

In a frantic opening period, Samuel Eto’o opened the scoring with a lovely curling finish from the right, before Andre Schurrle’s shot crept in at the far post.

Eden Hazard’s penalty, an Oscar double, and Mohamed Salah’s first goal for the club completed the scoreline, which will send tremors through the entire Premier League, and deal a psychological blow to Arsenal in the race for the title.

Had little to do, but beat out Tomas Rosicky’s rasping second half effort well.

Never stopped running, and was typically an immovable object at right back.

Dealt with the limited threat of Olivier Giroud comfortably, and never looked troubled.

Coasted through with ease, and together with Terry, kept the Gunners at bay.

Rock solid. Arguably his best performance in a Chelsea shirt, and has finally quelled any lingering calls for Ashley Cole to return. Fantastic.

A tank in the centre for the Blues, Matic’s power arguably won the midfield early on for his side, and the big Serb never relinquished control.

Unfairly a novelty figure in the middle of the park in the eyes of many, Luiz was at his brilliant best against a beleaguered Arsenal. Strong in the tackle, and always joining in attacks, this display coupled with the Manchester City performance last month should see him become a much more regular feature for the club in the middle.

Came off for Jon Obi Mikel late on.

Bagged a brace, and could have had even more, with the Brazilian’s timing and positioning exceptional today at a sunny Stamford Bridge.

Came off for Mohamed Salah just after the hour, who was very lively, and scored his first Chelsea goal after beating the offside trap only minutes after three minutes of coming on.

Solid yet unspectacular from the all-star Belgian today. Cooley dispatched his penalty in the first half to put Chelsea 3-0 to the good, but did little beyond that.

The German was a revelation today. His endless running, decent set-pieces, and clinically taken goal were real highlights on a day of unparalleled success for the Blues.

Scored a brilliant opener, but was withdrawn soon after through injury. His replacement Fernando Torres was at his unselfish best, and despite not getting on the score-sheet, was integral to his side.

Not at his best today, and let Oscar’s shot slip through his hands for the fifth Chelsea goal.

Passionate and strong, the Frenchman was the Gunners’ top performer on a day to forget.

A woeful afternoon from the usually reliable defender. Poor clearances, misplaced passes, and off the pace, Koscielny was only afforded the first half, coming off for Carl Jenkinson.

Like his partner in defence/crime, the German was meticulously taken apart by the pace of the Chelsea attack.

Atrociously sent off in the first half for an Oxlade-Chamberlain handball, even the Chelsea fans felt sorry for the England man.

Like the rest of his teammates, Arteta couldn’t keep possession, and failed to get his side going.

Brilliant against Bayern midweek, appalling at Stamford Bridge today. The Ox was rather like a piece of road-kill in the middle of the park, and should have been dismissed in the first half, with Gibbs suffering his punishment.

Came off for Mathieu Flamini at half time.

A good shot near the end of the game, but the game was long lost by then. His performance was otherwise peppered with wasteful passing.

Bright and bubbly from the Spaniard; Cazorla was the most interested of the Arsenal attackers at Stamford Bridge, but couldn’t spark his side into life.

Sacrificed when Arsenal went down to 10 men early on, his replacement Thomas Vermaelen joined the chaotic Gunners back-line, and could do nothing to stem the flow.

None existent apart from a crucial chance in the opening exchanges, and many Arsenal fans will point to his miss as one of the turning points in the match.