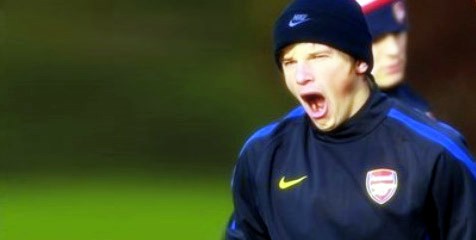 Andrei Arshavin has looked a shell of the former player that he looked in his debut season for Arsene Wenger’s Arsenal. Since the start of last season, however, his form has taken a downturn and rapidly. The Russian winger needs to imprint the stamp on Arsenal of the age old saying “form is temporary, class is permanent.”

Is this the same man who rattled in four goals at Anfield in a classic match a couple of years back? The same winger who was instrumental in Arsenal’s domestic and European aspirations? The opening part of last season’s campaign brought goals about in games against the likes of Blackpool, Wigan and Braga but as the turn of the year came about, Arshavin had changed.

Sloppy passes and a poor touch was detrimental to his lack of form and possibly Arsenal’s fourth place with the poor end to last season which begun in the Carling Cup final in March. This form continued right into this term, the only difference being that Arshavin was beginning to be left out of the starting line-up more and more as the weeks progressed.

Despite the departures of Samir Nasri and Cesc Fabregas to Manchester City and Barcelona respectively, Arshavin has been unable to fight for his position in the Arsenal midfield. You would’ve thought, especially with those well documented sales in the midfield ranks that Arshavin would’ve been able to come to the forefront.

Gervinho looked to become Arshavin’s replacement but he has been used more of a second striker, playing in behind Robin van Persie who is in hot form at the minute. Arshavin was well on his way to becoming a fan favourite at the Emirates but in the past season and a half, he hasn’t fulfilled that potential and expectation that was laid upon him when he arrived from Zenit St Petersburg and his beginnings as an Arsenal player.

This is the winger who was instrumental to Zenit’s bright Europa League campaign in 2008, he captured the Arsenal fans’ imagination with his terrific form after he signed in 2009 but has since waned. Arshavin was, and still is, one of the leading lights in Russian football – being a major part in their Euro 2008 campaign which saw them tackle the likes of Netherlands and Spain before being eliminated by the latter who would go onto receive greatness such as the European Championships and World Cup.

Even now, Arshavin is one of the best in the Russian line-up only he can’t translate those performances onto English turf for Arsenal. He recently captained Russia to another European Championship qualification campaign successfully and will want to re-write history for Russia next summer.

Arguably his finest hour in an Arsenal shirt – albeit a yellow away one – was in a midweek match in April 2009 at Anfield. Arshavin had only scored twice in his previous two months at the Emirates but his form was mesmerising having signed in the London snow on transfer deadline day in early February, showing the determination that Arsenal needed to gift them a first league title since the Invincibles in 2004.

He was named man of the match and achieved something that hasn’t happened in a league match since 1946 when Dennis Westcott scored four for Wolves. Arshavin became the sixth Premier League player to score four goals in an away match as he single handedly handed Arsenal the point against a strong Liverpool side who were gunning for the league against Manchester United at the time.

His new found form at Arsenal increased rapidly – the new fan favourite was named captain for the first time in his short Arsenal career at Fratton Park against Portsmouth just a couple of weeks later.

This popularity might have waned slightly in the past couple of months to suit his dip in form on the left wing. The Russian captain needs to re-capture the glimpses of form which saw him looked upon as a fan favourite from 2009 onwards. Arsenal don’t necessarily need it at the moment as recent results have kick-started a season which didn’t look to achieve anything of significance.

However, with Jack Wilshere ruled out until December and Gervinho finding it hard since his first game to fit into the Arsenal set-up, Arshavin needs to take a look at Theo Walcott’s performance against Chelsea on Saturday afternoon. Walcott was a shining light in the 5-3 win away at Stamford Bridge which saw him provide decent opportunities and score a bizarre yet spectacular goal.

It was at one time that Andrei could provide this but no longer, it seems. Nasri and Fabregas’ replacements aren’t of that same calibre that Arsenal expect, a former second rate Liverpool and Chelsea player in Yossi Benayoun and Mikel Arteta aren’t as renowned or experienced in Europe like the two departures, or Arshavin himself.

Gervinho’s signing could prove to be the Russian’s downfall at Arsenal though. If Gervinho can find the form similar to that of Arshavin’s when he began his career at the Emirates then it could spell the end of the Russian captain’s Arsenal career. His days are certainly numbered if the Brazilian can achieve that.

Andrei Arshavin will not be passed up for signing by any club and any club would be lucky to have the Russian winger. Flashes of brilliance and quality are there for all to see, surely, it’s only a matter of time before one gives way.

Either it’ll be his poor form which is replaced for the old Arshavin or it could be, rather sadly, the departure of another big name from Arsenal and will be snapped up in an instant with a lot of clubs lining up for his signature.

Read more from Jake Doyle at his personal football blog, The Twelfth Man.