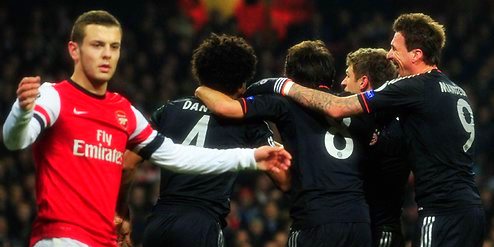 There’s a reason Arjen Robben and Mario Gomez can’t even get in the starting XI at Bayern Munich. The former plays by his own rules, prioritising flair over efficiency, whilst the latter lacks the all round play to be the focal point of an incredibly well balanced team.

From back to front this team plays for each other. The likes of Manuel Neuer, Phillip Lahm, Bastian Schweinsteiger and Thomas Muller exemplify the philosophy Jupp Heynckes has instilled in his side, one that resembles that of the German national team – but with a little something extra.

The current squad blends experience with youth oh so seamlessly. Plenty of the team put out last night are playing to the highest level in their careers thus far; Munich have conceded 7 goals all season domestically, while a goal difference of +50 shows that they don’t exactly go out to secure 1-0 victories.

Franck Ribery appears to be flourishing in his current role, which lacks the pressures of years gone by – he is no longer the primary source of creativity in the side, with Toni Kroos stepping up as the maestro he has looked odds on to become.

Add to that a fully fit Schweinsteiger, Thomas Muller in the form of his life and a machine like Mario Mandzukic bullying opposition defenses into submission whilst still finding time to bring others into play, and we have ourselves an outfit superior to any Bayern side in the past decade.

Meanwhile, over here in London, Arsene Wenger and his ragtag band of not so merry men can still maintain their pride.

Short of another masterclass from one of Jack Wilshere or Alex Chamberlain, this season will not bring forth any silverware for fans of the North London outfit; in truth though, of all the criticism that could be leveled at Wenger this season, losing out in the Champions League to this Bayern Munich side is nothing to be ashamed of.