Arsenal return from their defeat in Dortmund to travel to Aston Villa in the Premier League on Saturday.

The Gunners were convincingly beaten by Borussia Dortmund on Tuesday night in their opening UEFA Champions League group stage match. More bad news on the injury front for the Gunners as Jack Wilshere picked up a knock on his ankle.

Arsenal have draw three consecutive matches in the Premier League and are yet to keep a clean sheet this season. Including their Champions League playoff matches with Beşiktaş, the Gunners have won only one of their last six matches in all competitions.

Aston Villa have surprised most people with their start to the season, picking up 10 points from four points to put them in second place heading into the weekend.

Paul Lambert’s side were 1-0 winners at Liverpool last weekend with goalkeeper Brad Guzan being called into just a solitary save – such was the great defending by his teammates.

The Villans defence has been rock solid this season with Hull City’s Nikica Jelavić the only player to stick the ball in the back of the net past them in 360 minutes this season.

Ron Vlaar missed last weekend’s victory over Liverpool with a calf injury and is a doubt for this weekend too. Nathan Baker put in a man of the match performance as his replacement at Anfield.

Both Christian Benteke and Libor Kozák have been injured since last season. The Belgium striker is back in training but is not ready to return this weekend.

Theo Walcott is another week or two away from returning. Mathieu Debuchy is out with an ankle injury. Jack Wilshere and Nacho Monreal both have knocks but are expected to be fit if called upon on Saturday. 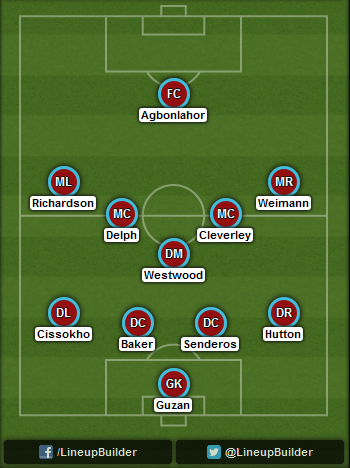 This formation is assuming Ron Vlaar doesn’t return to the starting lineup due to injury. Tom Cleverley was victorious on his debut – Fabian Delph is playing better than I sometimes give him credit for. The midfield is protecting the defence very well whilst the pacey wide men and Gabby Agbonlahor look to score on the counter attack. 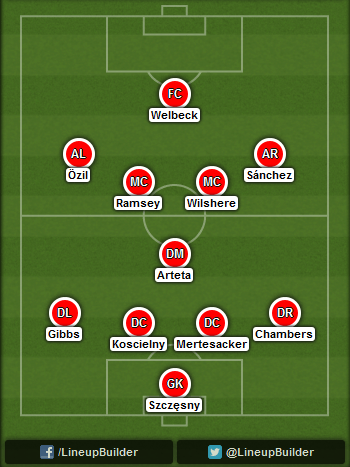 With Mathieu Debuchy out injured this is Arsène Wenger’s strongest defence. Nacho Monreal is his only other experienced option in defence anyway. Mesut Özil continues to be given chance after chance despite his horrible form for the Gunners. Fans will soon start to call for Alex Oxlade-Chamberlain to replace him down the left wing with the young Englishman’s hard-working efforts as a substitute in games this season. But Wenger’s too stubborn to drop the club’s record signing isn’t he?

Gabby Agbonlahor vs Laurent Koscielny
When Aston Villa won at Arsenal on the opening day of last season, Gabby Agbonlahor’s pace caused the Gunners defence all sorts of problems and resulted in Laurent Koscielny being sent off. Alongside the French defender is Per Mertesacker and he’s the slower one of the two. Andreas Weimann is another attacking threat to cause Arsenal’s defence problems, especially on the counter-attack.

Aaron Ramsey vs Fabian Delph
Aaron Ramsey has gone three games without a goal for Arsenal now but his runs into the penalty are always a threat if the box isn’t too crowded. Aston Villa play three central midfielders which should make it tight for the Welsh international to find space. Fabian Delph wins possession back for his team a few times a game but also gives away his fair share of free kicks. The Gunners have a number of good set piece takers if Delph and co give any away around the penalty are on Saturday.

Alexis Sánchez vs Aly Cissokho
Aly Cissokho has made a solid start to his Aston Villa career at left-back but is in for his toughest test so far this season. He was with Valencia when they played at the Emirates Cup in pre-season but the Spanish side did not face Arsenal. Alexis Sánchez works hard and creates chances down the right wing, or the left wing, or up front – wherever Wenger positions him. A goalscoring threat too makes this one of the key matchups in this fixtures.

Prediction: Aston Villa 1-1 Arsenal
Historically Arsène Wenger’s side don’t do too well after European away days and Aston Villa are undefeated this season. Arsenal’s last three Premier League games have been score draws – how about a fourth in a row?