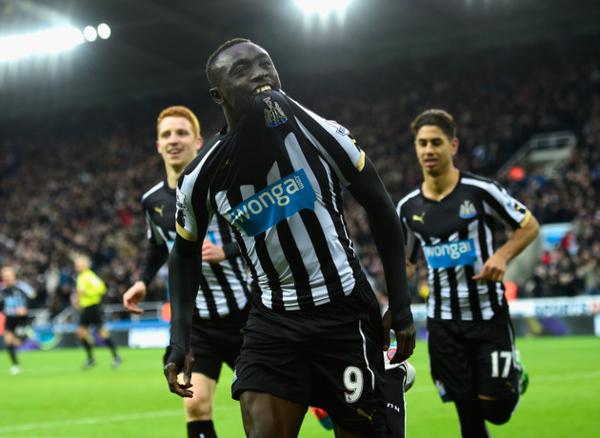 Arsène Wenger was able to rest a number of his first-team players midweek in what was almost a dead rubber UEFA Champions league tie in Turkey.

The Gunners marched to a 4-1 thrashing of Turkish side Galatasaray with Lukas Podolski and Aaron Ramsey both scoring a brace. The game also saw Mathieu Debuchy make his first appearance for three months after a long spell on the sidelines, and Wojciech Szczęsny return in goal.

Newcastle have won six of their last eight in the Premier League, which includes ending Chelsea’s unbeaten run last weekend. Substitute Papiss Cissé scored both goals for the Magpies whilst their defence stood firm.

Wojciech Szczęsny returned in goal on Tuesday night, so don’t be surprised if the Polish goalkeeper starts ahead of Emiliano Martínez this weekend, despite the young Argentine starting the previous four. David Ospina is still out.

Calum Chambers is suspended, centre-back Laurent Koscielny and left-back Nacho Monreal are ruled out through injury, leaving the manager with limited options in the middle. Therefore Wenger either has to move Mathieu Debuchy to centre-back or promote a youngster to the first-team.

In midfield, Mesut Özil, Jack Wilshere, Mikel Arteta, Theo Walcott and About Diaby are all out. Whilst they have numerous midfielders on their books, it doesn’t help having four first-team players out on top of defensive injuries.

The options available to Alan Pardew are only slightly better with Newcastle too without a number of players.

Their two first choice goalkeepers, Tim Krul and Rob Elliot are both out. Youngster Jak Alnwick made his debut in the second half against Chelsea last weekend.

Centre-back Steven Taylor is suspended following his dismissal last weekend. Full-back Ryan Taylor is sidelined through injury once again, and Davide Santon has been injured all season.

A big loss in midfield is the suspension of energetic Moussa Sissokho. He is joined by Siem de Jong, Gabriel Obertan and Rolando Aarons who are all injured.

Newcastle’s long injury list is mainly to players who haven’t featured much this season but the two suspensions will be a big loss for the visitors. 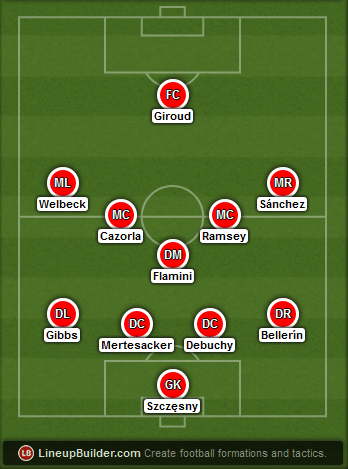 We’ve surely got this one right, haven’t we? Arsène Wenger doesn’t have much else to choose from. The defence will be a huge concern for the fans after a makeshift back four conceded four goals at Stoke City last weekend. Going forward, on paper, they still look very strong. 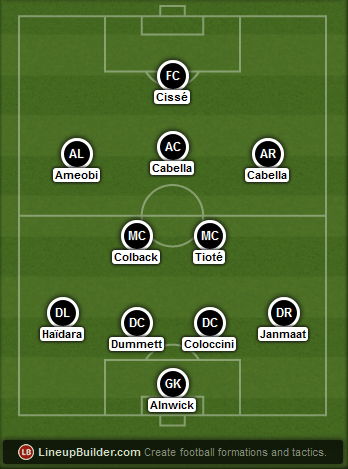 Alan Pardew has a choice between Papiss Cissé and Ayoze Pérez to start up front. We think he’ll reward the Senegalese international with a start up front and then stick the Spaniard behind. Pérez is versatile and has also spent time on the wing this season. A few more changes in the starting lineup include a new goalkeeper, centre-back and Cheick Tioté replacing the suspended Moussa Sissokho.

Papiss Cissé vs Arsenal’s centre-backs
Per Mertesacker is slow and whoever partners him will be a makeshift centre-back. Newcastle will definitely be looking to exploit the Arsenal defence with all its absentees. The Senegalese striker has an eye for goal and pace to go with it. Supported by the likes of Ayoze Pérez, Rémy Cabella and Sammy Ameobi, they are a great threat on the counter-attack.

Alexis Sánchez vs Massadio Haïdara
If Arsenal are to come through this match and claim three points, one of their key players is almost-certainly going to be Alexis Sánchez. The Chilean was rested midweek and has been one of the stars of the 2014-15 Premier League season so far. Incredibly difficult to keep quiet, Arsenal’s big summer buy has the pace, strength and goalscoring ability to cause Newcastle’s left-back some problems.

Ayoze Pérez vs Mathieu Flamini
Newcastle’s young Spaniard, who reportedly turned down Real Madrid and Barcelona to move to St James’ Park, has shown in the past month or so how lethal he can be in front of goal. Expecting him to play behind the striker in this one, look for Ayoze Pérez to cause Mathieu Flamini problems and buy himself some space to get shots in on goal. Flamini this season has been pretty poor in defending and positioning and we can see Pérez taking advantage of that.

Prediction: Arsenal 2-2 Newcastle
Going into this match we are expecting goals. Two teams who have scored a few recently and two teams with absentees at the back. Alan Pardew’s side defended very well against Chelsea which could be the difference maker, but it felt like the Blues had an off-day last weekend. Arsenal have a lot of attacking talent and they will need it to get something from this match given their lack of defensive options and the result of it last weekend. Expect plenty of action.