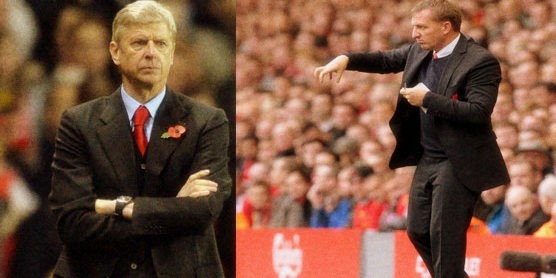 Liverpool travel to Arsenal for a vital Premier League clash where defeat on Saturday lunchtime could all but kill their hopes for returning to the Champions League next season.

The Reds could end the week trailing eight points behind Manchester United and nine behind Arsenal therefore it looks like a must win game for the Merseyside giants.

Liverpool will still have one genuine chance of winning silverware, should they win against Blackburn in the FA Cup, but a top-four finish remains the main priority. Failing to reach that target will be seen as a huge disappointment, especially after setting such high standards last season.

It is indeed frustrating that a game of this magnitude hasn’t been hyped enough. To be fair this fixture has always produced great entertainment, but somehow lacks the grandeur and spice needed for a fascinating pre-match build up.

Both the sides have played some scintillating football this season and are in outstanding form heading into this tie, with Arsenal having picked up 27 points in their last 10 games, while Liverpool have managed 25.

The Gunners probably will start as heavy favourites this weekend. They are on a run of eight consecutive wins at home, and their key players have been delivering at the right time. Olivier Giroud has silenced his critics with nine goals in the last nine matches, while the return of Aaron Ramsey from injury is a timely boost for the Gunners.

Mesut Ozil, despite his recent bizarre controversy where he missed the trip to Newcastle through fatigue and yet was seen in a German nightclub the same evening, has looked sharp, while the likes of Bellerin, Cazorla and Ospina have been excellent in the past few months.

Liverpool have their own problems and Rodgers must find a solution at the earliest. They will be without central defender Martin Skrtel who starts a three-match suspension for a stamp on Manchester United’s David de Gea. Skipper Steven Gerrard is also missing through suspension, although he would not have made the starting line up anyway.

Daniel Sturridge was withdrawn from the England squad with a fear of muscle injury and there are doubts over his participation. In case, he pulls out, Sterling could be asked to spearhead the attack, with Rodgers highly unlikely to opt for the out-of favour Rickie Lambert or Mario Balotelli for such a crucial game.

On top of that Raheem Sterling’s latest interview with BBC has put an unnecessary pressure on the club. The 20-year-old went public this week to clarify his contract situation, and in doing so, has only added fuel to the already roaring fire.

Sterling insisted that he was no “money-grabber” but at the same time flirted with his future by claiming Arsenal’s interest was “quite flattering”. There are suggestions that Sterling has been misguided by his advisors while his agent Aidy Ward might be calling the shots from behind the scenes which has only complicated the situation.

The only positive Rodgers can draw ahead of the fixture is Lucas Leiva’s return to full fitness. The Brazilian midfielder was in tremendous form before picking up a thigh injury while playing against Everton in early February. His sturdy presence in the midfield alongside Jordan Henderson and Joe Allen could prove to be crucial in winning the midfield battle.

There is hardly any room for error now. In that context, it won’t be a bad time for Rodgers to pull out a surprise by implementing a new strategy. Rodgers deserves all the credit for his bold move of shifting to a 3-4-3 (or its variations) system that saw the Reds reviving their season after a disastrous start and an early Champions League exit.

Maybe it’s time for Rodgers to rethink about his strategy again. The recent results – a drab 0-0 draw against Blackburn at Anfield, hard fought 1-0 win at Swansea and 2-1 defeat to United at home – suggest that opposition teams have probably found a solution to counter the system.

United manager Louis van Gaal admitted that he used Liverpool’s own medicine to beat their opponents. He said after the match:

“The first half was very good because I knew in advance that Liverpool would press us and they did, but we played them off the pitch in the first half. We scored a fantastic goal and we gave nothing away, so it was a superb first-half.”

Although Wenger is not a reactive manager and Arsenal do not always play according to the opposition’s weakness, the Frenchman will definitely be taking note of the gradual decline in Liverpool’s effectiveness.

After a 13-game unbeaten run, it seems like Liverpool peaked too early and have now gone off the boil.

Another important factor that could play on the players’ mind is Liverpool’s poor away record against Arsenal. The Reds have won just once against the Gunners away from home in last 18 matches, while Rodgers has yet to register a victory at the Emirates.

With problems on and off the pitch troubling Liverpool, in normal circumstances, Rodgers would have been more than happy with a draw against the Gunners. But a draw probably won’t be enough now, as they need to cut the five-point gap with Manchester United in order to stay in the hunt for a top four finish.

Liverpool are left with no options rather than going for the win, however, for a side that has lost only once at home all season and riding high with momentum, the task of picking three points from the Emirates seems improbable.

Rodgers will need moments of inspiration from his key players like Coutinho, Henderson and Sterling on Saturday. Liverpool hold a good record against big teams, but they also have a tendency to crack under pressure. This time they must ensure that history does not repeat again.