Arsenal’s manager Arsene Wenger mentioned that he wants an exhibition of mouthwatering total football in their tie against Catalan giants Barcelona in the quarterfinals of the Champions League. He hopes that this match will go down as one of the matches of the decade.

Arsenal finally has the chance to gain revenge on their 2006 defeat in the final of the Champions League in Paris by Barca – Wenger insisted that the Jens Lehmann’s red card in the 18th minute ruined the game.

In this blockbuster encounter we will see Thierry Henry’s return to the Emirates and later Cesc Fabregas’s return to the Nou Camp. Titi being one of the greatest Gunner of all time, playing seven seasons and scored 174 goals and he now plays for Barcelona. Wenger said:

‘He (Henry) had a fantastic time at Arsenal and we are forever grateful. But do you really think we will be focused on how Thierry will feel on the day?’

‘We will be focused on our game. It’s not a personal game, it’s a team game.’ 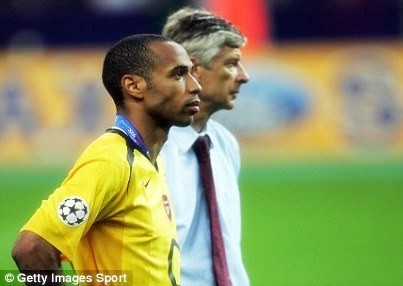 Don’t know about Fab but it doesn’t seem like Titi will be welcomed with a red carpet by his former manager, Arsene.

On the other hand, Cesc trained at Barca’s youth academy for six years and then signing a contract with Arsenal in 2003 – he has been heavily linked with a move back to Catalonia.

‘There will certainly be some emotion there but Fabregas is a winner.’

‘He wants first to qualify. Cesc goes into every game to win it.’

‘The main thing is the quality of the game you will see on the day, and will not see maybe for 10 years.’

Moreover, William Gallas’s presence in the two-legged tie is also a question mark as he has been sent to a clinic to continue his rehabilitation from a persistent calf injury. Gallas is ruled out of the first leg of the tie on 31st March, 2010 and Arsene admitted that the French defender’s chances to play in the second leg in only 20%.