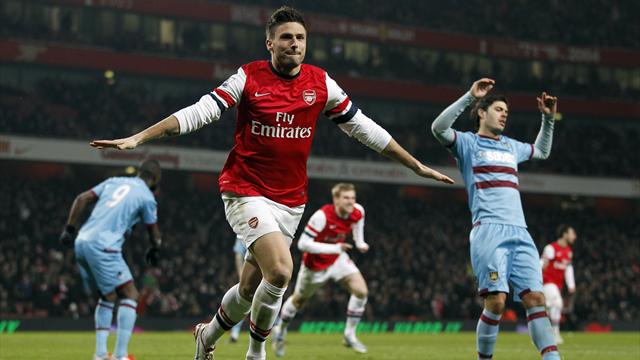 Olivier Giroud has revealed that Arsenal will sign a striker in the summer transfer window.

Apart from Giroud, the Gunners have the services of Yaya Sanogo as the only other striker in the squad as Nicklas Bendtner is set to leave the Emirates as a free agent once his contract expires on June 30.

The France international claims Arsene Wenger’s side will be looking to bolster their strike force to challenge for silverware next season.

“I can tell you that Arsenal will recruit a another striker this summer. We need it because all the big clubs have several great strikers to fuel the competition between them and have better results,” Giroud told Le 10Sport.

The North London club have been strongly linked with top quality strikers in recent times as they look to add a world class player to their squad in the summer transfer window.

Arsenal are already closing in on re-signing their former player Carlos Vela from Real Sociedad after the La Liga club’s president confirmed the striker would return to the Emirates.

Meanwhile, the Gunners are also closing in on signing FC Porto star Jackson Martinez. The €40m rated Colombian striker has long been linked with a host of Premier League clubs and the player’s agent has admitted that Arsenal are keen on snapping up his services.

Should Wenger manage to sign both Vela and Martinez in the upcoming transfer window, it will bolster Arsenal’s squad for the next season. With a few reinforcements in the midfield and defence, the Emirates club could one of the strong contenders to win the league title next season.