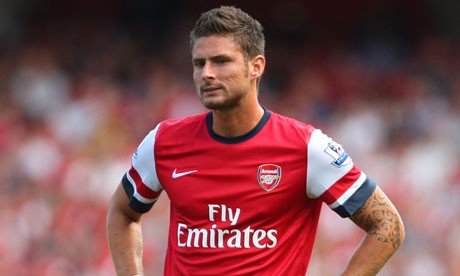 The North London club suffered heavy defeats at the hands of Manchester City, Chelsea and Liverpool away from home during the 2013-14 season. The Emirates club were on top of the league table for the most part of the season, but managed only to finish fourth at the end of the campaign.

Giroud has admitted that Arsenal lacked maturity while facing the big teams. The striker believes his sides’s defeats in crucial games, coupled with injuries was the reason behind their failure to win the league title.

“We were on top for a good half of the season and then we cracked. I believe we lacked maturity and that we had a lot of injuries at an important time,” The Telegraph quoted Giroud as saying.

“Above all, we weren’t able to adapt to the big teams. We have to show progress in these matches, to maybe play less football, but it’s difficult because it’s our playing philosophy.”

Meanwhile, Giroud managed 16 goals and had eight assists to his name from 36 Premier League appearances. The 27-year-old believes he has been constantly improving at the Emirates and has now set his sights on earning a new deal to extend his stay in North London.

“I feel at ease in the league. I’ve had a not bad first season and a second that was mainly good. I hope to do even better,” the French striker said.

“I’m progressing from year to year, in the image of the team that plays a polished game. I still have two years on my contract, but we are in negotiations to extend it,” Giroud added.

Wenger would be in the market to bring in a world-class striker in the coming transfer window. According to the reports, Real Madrid star Karim Benzema has been on Arsenal’s radar and he could partner with Giroud is the Frenchman makes a switch to the Emirates.