As Arsenal players struggled to convince Scousers that losing is part of being a trendy North Londoner this weekend, you’d be forgiven for asking exactly where all the adversity came from. A team carrying Robin Van Persie, Andrei Arshavin and Thomas Vermaelen shouldn’t struggle very often, yet it couldn’t pull away from a team containing Charlie Adam.

When the players can’t explain a failure, a look at the manager often does. Unfortunately for Arsene Wenger, last month’s assertion that Arsenal wouldn’t be a “big club” if they sold Cesc Fabregas and Samir Nasri is gone but, like the two players, a long way from forgotten. It’s the essence of Arsenal’s woes. When a manager instils such unwavering faith in one small group of his players, the translation into an equivalent lack of faith in those left behind becomes inevitable. Wenger has, over time, placed absolute faith in individuals, and now they’re gone his team is ready to suffer for it.

The players still around will have watched on as Wenger allowed Fabregas to become an all powerful symbol of his club and his project. Whether it be the tactical room afforded to him, the captaincy gifted to him at such an early age, or the desperate – and costly – fight to keep him from Barcelona’s grasp for one more year, the message resounding around the Emirates and the rest of the Premier League is that his loss is more than just the loss of one player, it’s losing the ol’ heart and soul of the club.

Nasri has undergone similar deification. Like Fabregas, an excellent player, the efforts to keep him this summer – prepared, at one point, to let him leave for zilch in 12 months – still far outweigh anything he has done on the pitch. Arsenal’s struggle to keep simply doesn’t make sense for a player who made neither the top twenty Premier League assist makers last season, nor the top twenty goalscorers.

The disproportionate message spelled out by Wenger was that Arsenal couldn’t afford to lose the excellence of either player and, now that they have – or in the case of Nasri, all but have – the players left behind are playing like they believe it. 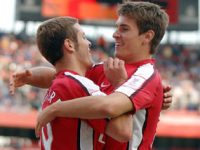 The reality should be that the club still holds enough cards to win. Above all else, the most suitable replacements for Nasri and Fabregas are already in place: Aaron Ramsey and Jack Wilshere constitute rare talents; more than that, they can call on experience belying their youth and the paths of the men they’re replacing as evidence of their right to a chance.

Beyond them, the £50million now available could do a nice job of replacing anyone. But Wenger has already given away that he thinks he has a bad hand – and that kind of card player never wins.

Alex Ferguson doesn’t lose very often – his players, notably, aren’t symbols of his club. When it came to shifting Cristiano Ronaldo, pragmatism was the order of what could have been a bleak day: he held on for a year and claimed another Champions League final and another league title before sanctioning an £80million deal for his World Player of the Year. Forced into selling, three years on, Ferguson has won more trophies than Ronaldo.

Where players have threatened to outgrow his club of their own fruition, Ferguson has done everything he can to ship them out on the quiet. Roy Keane, one of the greatest players in a history great players, was shipped out to Celtic in the middle of a January; England’s captain at the time, David Beckham was dismissed as a prima donna and replaced with Ronaldo when Real Madrid came calling for him – only the fans stopped for sentiment. Ferguson only stops to flip two fingers.

Wenger has to be his own man, but learning from Ferguson is rarely a wasted effort. Fabregas and Nasri are very, very good players, but as Wenger has said more recently, everyone is replaceable. When his actions meet that rhetoric, perhaps Arsenals have a chance of beating Liverpool at home.