Well, well , well Arsenal fans would jump in sheer delight as I break the news that French media outlet Le 10 Sport have reported  that the Gunners have reached an agreement to sign Real Madrid Legend Iker Casillas. The Spaniard has endured a torrid time at the Santiego Bernebau after being relegated to the bench last season by Jose Mourinho, the current Chelsea who preferred Diego Lopez to the 33 year during the latter part of his tenure at the Spanish capital. 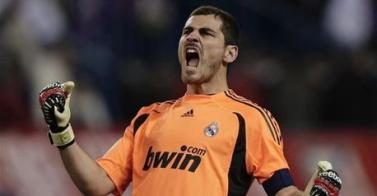 Arrival of a new goalkeeper imminent: Mundo Deperotivo have also reported that Costa Rica’s World Cup star Keylor Navas is set to sign for the Galacticos, which definitely means one out of Lopez and Casillas will head towards the exit. It can be assumed in hindsight that Navas, who is coming at the back of a terrific World Cup in Brazil will definitely not be sitting on the bench, rather will stake his claim for the number one role as his deal might be agreed as early as Friday.

Diego Lopez situation: There was significant interest from Monaco and Napoli for Lopez but those reports have been put to rest in the past few weeks. Moreover Lopez’s agent Manuel Garcia Quilon had repeatedly maintained that his client will not leave the club, “Diego is not going to go from Real Madrid.”

Crunch meetings ahead: It has also been cited that Casillas was set to hold talks with Real President Florentino Perez to discuss about his future at the club but the meeting had got delayed as Madrid were finalized deals for Toni Kroos and James Rodriguez. It now appears that Perez will fly to the United States where Real are busy in their pre season preparations.

Le 10 Sport have also mentioned that should Casillas switch loyalties to join Arsenal, he will earn a salary of € 9 million a year and his contract would cover five seasons. But will manager Arsene Wenger sign yet another goalkeeper after having recently signed David Ospina from Nice?