Anderson Talisca is one of the few positives for Benfica this season, as the Eagles shake off their disappointing summer behind with an impressive start to the season. Really this summer hasn’t been productive for them. Benfica, like all other Portugal clubs, are a typical selling club, but this summer it has been a story of departures with several top players having left the club for better career abroad.

The likes of Markovic, Garay, Rodrigo and Andre Gomes have all left the club; a total outlay around €74m earned from transfer sales has been used to repay the debts. And yet, here they are leading the Liga Sagres with four points clear of Porto at the top of the table after seven rounds of matches.

New signing Talisca has made a huge difference. The 20-year-old Brazilian midfielder, who joined from Bahian championship for a paltry fee of €4m only, has taken the league by storm and has scored six goals already at an average of 0.85 goals per game. 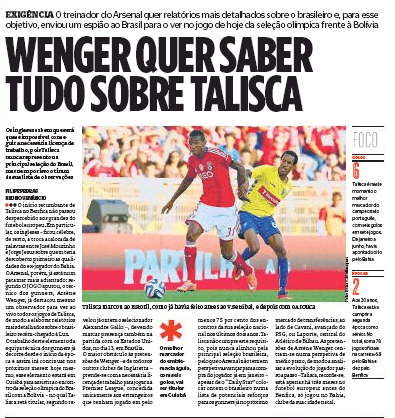 His good form has already alarmed the top Premier League clubs with reports emerging that Liverpool and Chelsea are thought to be interested in him. In fact, Jose Mourinho even indulged in a war-of-words with Jorge Jesus by claiming had there been not a work permit issue, the midfielder by now would have played in the Premier League.

The midfielder, unfazed with rumours circling around, has acknowledged the appraisals from the Special One but says he is happy at Benfica.

Arsenal are also thought to be interested in him, with Portugal newspaper O Jogo reported yesterday that Arsene Wenger wants to know the details about the player before making any move and has even sent scout to follow the youngster closely this week in international duty, when he will be in action against Bolivia with the Brazil Olympic team.