Italian media are pretty confident that AC Milan will agree a deal with Porto for Jackson Martinez in the next few days. The Colombian international has a reported €35m buy-out clause, and his agent has confirmed that the striker would leave the club in the summer transfer window.

According to Gazzetta dello Sport & other Italian media publications, AC Milan vice-president Adriano Galliani will be flying to Portugal shortly to finalise a deal for Martinez.

Martinez has been a regular goal scorer for Porto, scoring 92 times in all competitions in the last three seasons. He has been a reported target of several top clubs across the Europe, including the likes of Arsenal and Valencia. 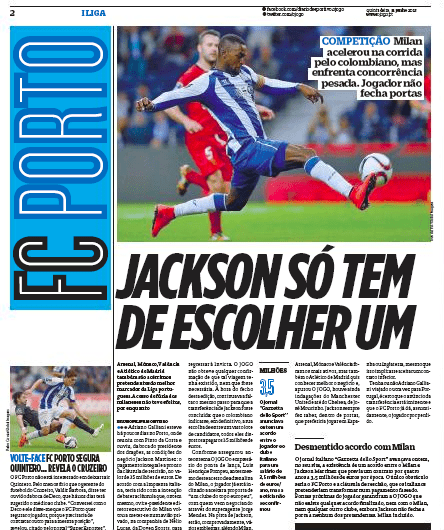 When it seemed like AC Milan are leading the race to sign Martinez, Portugal newspaper O JOGO reports today reports that the deal far from being done. In fact, they claim that Arsenal, Valencia, Monaco and Atlético are all willing to pay that amount for the Colombian goal machine.

Porto want his future to be solved immediately and it is up to Jackson now to find his next club this summer. Arsenal could be interested in signing a new striker, but the Gunners have other targets in their mind as well.

According to The Telegraph, Arsenal are also interested in signing Porto’s attacking midfield Yacine Brahimi, but the Portugese club have no intentions of selling him at the moment. They are not even willing to negotiate any deal for him and would only sell if the player’s €50m buy-out clause is met.