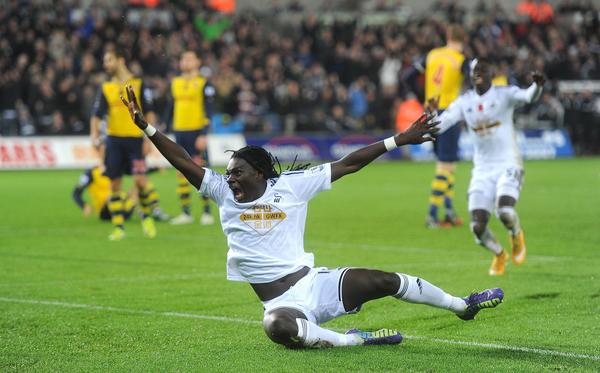 Swansea produced a spirited second half display to come back from behind and beat Arsenal by 2-1 at the Liberty stadium on Sunday. Alexis Sanches had given the visitors the lead before Gylfi Siggurdson restored parity with a sublime free kick. Substitute Bafetimbi Gomis then headed home the winner to send the Swans faithful to delirium in what was under poor playing condition under the heavy rain. As a result of the defeat, Arsenal are now 12 points behind Chelsea after just 11 games while Swansea are tied on points with West Ham United at fourth.

Here are Arsenal’s player rating from the enthralling clash:

Wojciech Szczesny 5- The Polish International made a great save from Marvin Emnes but could only watch helplessly as Gylfi Siggurdson’s sumptuous free kick helped Swansea to restore parity. Szczesny though was at fault for Gomis’ winner, getting caught on his heels and as Gary Neville would say, he should have done better.

Calum Chambers 4- What a shocker for Chambers. he was terrorized by Jefferson Montero throughout the 90 minutes and was lucky to get away without conceding a clear penalty after having shoved Wilfried Bony in the first half. Phil Dowd made a shocking decision. 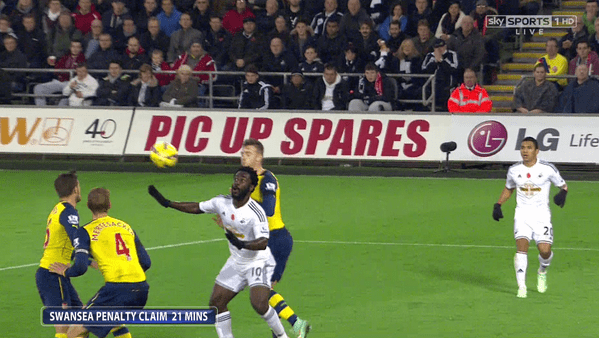 Per Mertesacker 6– The German personally had a good game but he is surely missing Laurent Koscielny beside him. But then Arsenal had Nacho Monreal.

Nacho Monreal 4- Shocking game for the Spaniard playing at centre back. Rubbish all evening, also failed to mark Gomis which led to Swansea’s winner.

Kieran Gibbs 6- Not a bad game but neither a good one given his standards. Did barge forward in attacks but gave away a silly free kick which led to Siggurdson’s game changing moment.

Mathieu Flamini 6- The Frenchman was given the job job of keeping Sigurdsson quiet and did so but didn’t help Arsenal build from the back.

Aaron Ramsey -5 Poor game from the Welshman, tried to do everything himself and looked desperate to get into the score-sheet. Unfortunately did neither.

Santi Cazorla 6– the Spaniard did a good job in the attacking third but lacked the bite. Didn’t come up with a match changing performance when required.

Alex Oxlade Chamberlain 8 Apart from Alexis Sanchez, the youngster was Arsenal’s best player on the pitch. menaced the Swansea backline with his devastating pace. Instrumental in setting up Sanchez’s goal running in from the deep.

Alexis Sanchez 7  Another game, another goal but this time in a losing cause. His sixth goal in 4 games as twelfth overall this season.

Danny Welbeck 7- Showed great work rate and worked very hard running in between channels. Also served up a cool and composed overall game never getting too ahead of himself.

Yaya Sanogo n/a Ok bye, we have reached the end. What more did you expect.