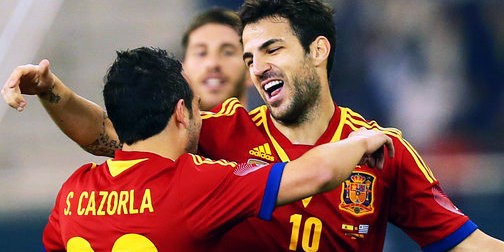 Arsenal now have no excuse for failure to re-sign former midfielder Cesc Fabregas from Barcelona should he become available.

Arsenal’s chief executive Ivan Gazidis made the club’s prominent financial position quite clear last week with comments that Arsenal could match any other big clubs in terms of financial muscle. Gazidis told the BBC:

“We have a certain amount of money which we have held in reserve – This year we are beginning to see something we have been planning for some time – the escalation in our financial firepower.”

That will leave many Arsenal fans without much doubt that the club should now aggressively pursue the option of bringing Cesc Fabregas back to the Emirates Stadium as speculation over his future in Spain rolls on.

Fabregas has failed to break the dynamic duo of Xavi and Andres Iniesta at the Nou Camp which has led to the suggestion that he could be tempted back into English football. If that’s the case then Arsenal hold the aces for two main reasons.

Firstly, he’s made his affection and love for Arsenal quite clear throughout his professional career.

He joined the Gunners as a young teenager at just 16-years-old and has revealed that he thinks it would be difficult to play for any other English side in the Premier League.

Secondly, Arsenal ensured that a clause was put into his Barcelona contract when he went back to Spain, which gave them the chance to re-sign him before any other club should he become available.

Both of those things give Arsenal a huge advantage over the other reportedly interested English club, Manchester United.

Arsene Wenger has already gone back on his policy of not re-signing former players when he brought Thierry Henry back to the club on loan from Major League Soccer side, the New York Red Bulls.

Gazidis has made it clear that Arsenal can finance this sort of deal, which means any failure to sign Fabregas if he’s available this summer means no other excuse other than Wenger doesn’t want him or doesn’t believe he’s good enough for his current side. The Arsenal CEO added:

“As we look to the next two, three years we will have an outstanding platform on which to compete with any club in the world – Very clearly, it will push the club forward and put us into the top five clubs in the world in revenue terms.”

If it’s the latter of those two options then the Frenchman could be becoming majorly misguided because Fabregas is a player who can glue together the current crop of Arsenal midfielders.

The balance of experience and youth in the current Arsenal side is fantastic. Mikel Arteta and Santi Cazorla have been injected and used in the current side perfectly, to compliment the younger players such as Aaron Ramsey, Jack Wilshere, Alex Oxlade-Chamberlain and others.

Cesc Fabregas has already played down rumours of an impending Arsenal return but now they have the money behind them, that clause giving them first option on re-signing him seems like a master stroke.