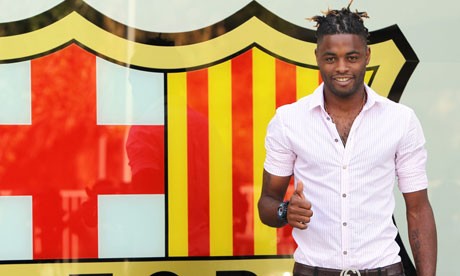 Barcelona have confirmed that Alex Song has passed a medical with the Spanish club, and will now join up with his new team-mates as a move has been finalised. The Cameroon international has signed a five-year deal with the Catalan giants, with a reported fee in the region of £15 million.

Song undertook a medical at Camp Nou on Monday morning, with confirmation coming from Tito Vilanova’s men in the form of doctor Ricard Pruna.

“He has a very low body fat percentage and very good muscle quality. All the tests have come out satisfactorily and he is available to the coach,” the medical man revealed on the official Barcelona website.

The African battler is said to have an €80 million buyout clause written into his contract with Barcelona, and has been identified as a replacement for Seydou Keita, who left the club earlier this summer. Song’s signing is the second major addition to Vilanova’s squad this summer, with Jordi Alba also joining from Valencia.

For Arsenal, Song’s sale represents a continuation of a rather transient summer in north London. The exciting purchases of Olivier Giroud, Santi Cazorla and Lukas Podolski have been counteracted by the exit of former captain Robin van Persie to Premier League rivals Manchester United and now Song’s switch to Camp Nou. With continued speculation over Theo Walcott’s contract also, this transfer window has mirrored the same period last year, after which the 2011-12 season started slowly following the summer departures of Samir Nasri, Cesc Fabregas and Gael Clichy.

Song’s move to Barcelona is a testament to just how far the defensive midfielder has come in recent times. With the afore-mentioned Fabregas leaving last year and Jack Wilshere spending the entirety of last campaign on the sidelines through injury, Song stepped up to the plate and was one of the Gunners’ most consistent and commanding performers. His exit will leave a gap in the Emirates Stadium side’s engine room that Arsene Wenger will now hope to fill before the window closes at the end of August.

There have been rumours that Song’s attitude in pre-season has been a key reason behind Wenger’s decision to part with the player, however this has been denied by the African’s agent. One way or the other Wenger will need another central midfielder as a replacement for Song, who showed versatility, a battling quality and even an eye for a pass and deep-lying playmaking skills in his seven years in north London.

A move for Yann M’Vila seems to have gone cold but Rennes have confirmed that there is Premier League interest in the France international. Nuri Sahin has been touted with a season-long loan move after finding opportunities at the Santiago Bernabeu limited last season, but the Real Madrid schemer is certainly a more offensive-minded player than Song. Wilshere’s expected return to action in October will be a boost for the club whilst Mikel Arteta and Aaron Ramsey will be asked to take more responsibility in Song’s wake.

After a blunt 0-0 home draw against Sunderland on the first day of the season, Arsenal fans will pray that the number of changes in personnel this summer do not have the same outcome as what they had to endure at the start of 2011-12. With Manchester City and Manchester United’s squads largely unchanged apart from new additions and only one new face in Chelsea’s starting line-up that beat Wigan on Sunday, Arsenal’s seemingly constant swinging door threatens to have the Gunners scrapping for a top four place once more this term rather than fighting for top spot.