Arsenal Lars Bender transfer saga takes a new twist: The Gunners could miss out on their long term target Lars Bender, as reports in Spain suggest, La Liga giants Barcelona have set their sight on signing him next summer.

Catalan newspaper Sport published an article today where they claim Barcelona are seemingly interested in Atletico Madrid’s Koke, who is also a reported target of Premier League giants Chelsea and Manchester City.

However, with Koke having a release clause of around €60m, and the player himself has shown time and again strong commitment to the Madrid club, it makes it difficult for top European clubs to price him away from Atletico.

Therefore, Barcelona are looking for a cheaper option and have set their sight on Bayer Leverkusen’s defensive midfielder Lars Bender, who is a more realistic target for them and would cost around €25-30m. 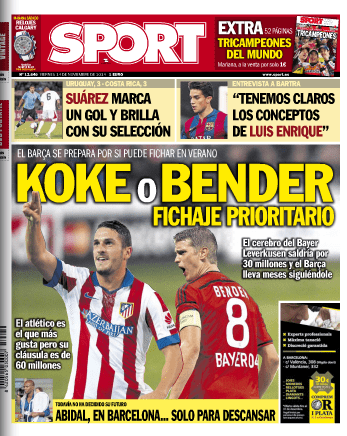 Barcelona are under transfer ban at the moment, but the Catalan club are confident that the ban will lifted next summer. In that case, a defensive midfielder will be a top priority for them and therefore may make a formal approach for the 25-year-old classy German midfielder.

Arsenal are thought to be a long term admirer of Bender. Back in July 2013, Guardian reported that Bayer had turned an offer from Arsenal making it clear that the player is simply not for sale.

Again during the summer, The Telegraph claimed that the Gunners have revived their old interest in Bender, who signed a new contract at the German club.

The Gunners probably need a solid defensive midfielder in the summer and could make a move for Bender once more. Arteta is slowly approaching the apogee of his career while Flamini and Diaby cannot be seen as long term solutions, hence a move for Bender makes lot of sense. In that case, the North London club may face a tough competition from the Catalan giants.