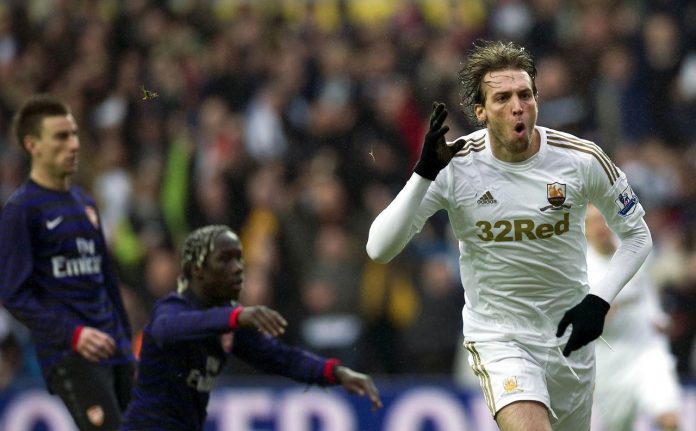 Arsenal’s ongoing desperation to calm the disillusioned fans by making the elusive big-name signing has led them to enquire about forward Miguel Michu of league compatriots Swansea City.

The 27-year old was signing of last season as he scored 22 goals and led his side to a record-high 9th placed finish – while winning the Capital One Cup.

His manager, Michael Laudrup, has spoken out about the Spaniard earlier this summer, after La Liga side Athletico Madrid were reportedly in bid for him. Weeks later and his stance still has not changed.

‘I spoke to Michu and he said ‘I am going to stay here’. If Arsenal came in with a bid, I know the reaction from the board and chairman will be ‘No’. Even if the money is ridiculous. (In selling him) we would get a lot of money, but why be the richest club in the championship? What is that worth?’

Arsenal are yet to make a bid, but it appears Swansea are letting them know not to waste their time in trying.

This season, the 27-year old has already featured in the Europa League qualifiers – scoring in the first leg. With the Swans signing prolific striker Wilfried Bony, the pair, as expected, have already linked up well on the pitch, and could form a formidable partnership this season.

His valuation is said to be around £12M, but Swansea have said they have no plans to let him go this close to the end of the summer transfer window, as they don’t want to be left without a replacement until the January window opens.

With Michu already showing good form in their opening games in Europe, why would Swansea entertain any interested suitors? The club have stated he isn’t for sale, and the forward has made no statement of desire to leave the side this season so Arsenal will have to keep looking.