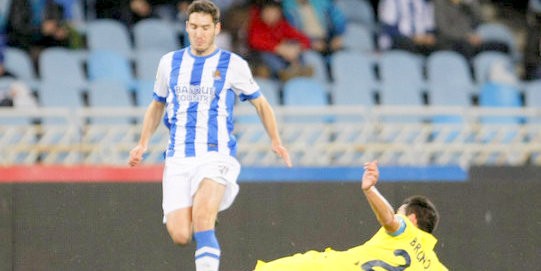 Arsenal are in talks with La Liga outfit Real Sociedad over the signing of young Spanish defender Joseba Zaldua, according to reports from Spain.

Arsene Wenger, who has this reputation of nurturing young unearthed talents and turn them into superstars, is taking a keen interest in the Real Sociedad’s highly rated defender, and could use Carlos Vela’s transfer situation to good effect in securing the deal.

Earlier this week, The Telegraph reported that the Gunners are ready to exercise the option to re-sign Vela, but are in negotiation to sell him back to Sociedad permanently or to any other European clubs.

Vela joined Sociedad in 2011 for £2.5m, and as a part of the deal Arsenal had negotiated a buy-back clause that will help them re-sign the Mexican for just £3.25m at the end of his contract.

The Mexican striker has had a productive three seasons in Spain, but probably Wenger doesn’t see him as an integral part of his plans and may sell him before he plays for Arsenal again.

Sociedad are therefore interested in securing a permanent deal for Vela and are in talks with the Gunners, though there are other interested parties as well.

Wenger is looking to make the best use of this situation and has opened discussion to sign Joseba Zaldua. The 21-year-old, who has a contract till 2016, has been promoted to the senior team last season, after spending two good years in the reserves, is seen as a bright prospect for the future.

According to Spanish newspaper El Confidencial, Arsenal are in talks with the player and his agent with the report claiming that the deal is said to be close to happening.

In any case, even if Arsenal manage to sign the youngster, he will be seen as the one for the future. Wenger still probably needs to buy a recognised right-back following the departure of Bacary Sagna, who joined Manchester City.