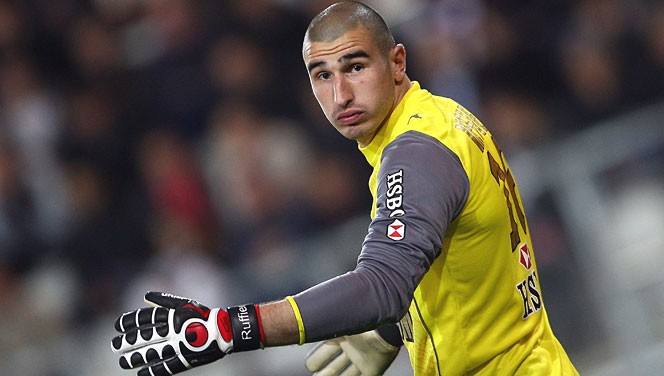 The London side are looking for competition for their current number one ’keeper Wojciech Szczesny, after selling back-up Vito Mannone to Sunderland.

Ruffier, 26, signed from AS Monaco in 2011. He made 128 appearances for the Ligue One side in his six-year association. For Saint-Etienne, the France international has made 87 appearances in just two years.

While his contract does have two years still to run, the club have confirmed they will consider letting him go for the right price.

‘St Etienne would like to keep him but if they get a good offer they would let him go. Currently there has been contact with an English club. Therefore, a future in the Premier League is a possibility.’ – Stephane Ruffier’s agent Patrick Glanz.

AS Roma were also said to be interested in the 26-year old, but have yet to make an official approach. Ruffier has featured for the France national team on one occasion, and hopes he can add to the solitary cap by playing at a higher level. His only appearance for France was in 2010 against Norway.

This season, he was a vital part of the side which reached the Europa League for the 2013/14 campaign – courtesy of finishing 5th in Ligue One.

Ruffier’s asking-price is said to be around £6M. Arsenal manager Arsene Wenger is said to have long been an admirer of the Frenchman. The Gunners reportedly made a previously failed bid to sign the goalkeeper a number of years ago.

Fiorentina and AS Monaco are two other sides said to be looking at procuring his signature this summer, but the Saint-Etienne man favours the Premier League over Italy.

Talks between Arsenal and Saint-Etienne are expected to be undertaken in the coming week of pre-season, where his future will then be decided.