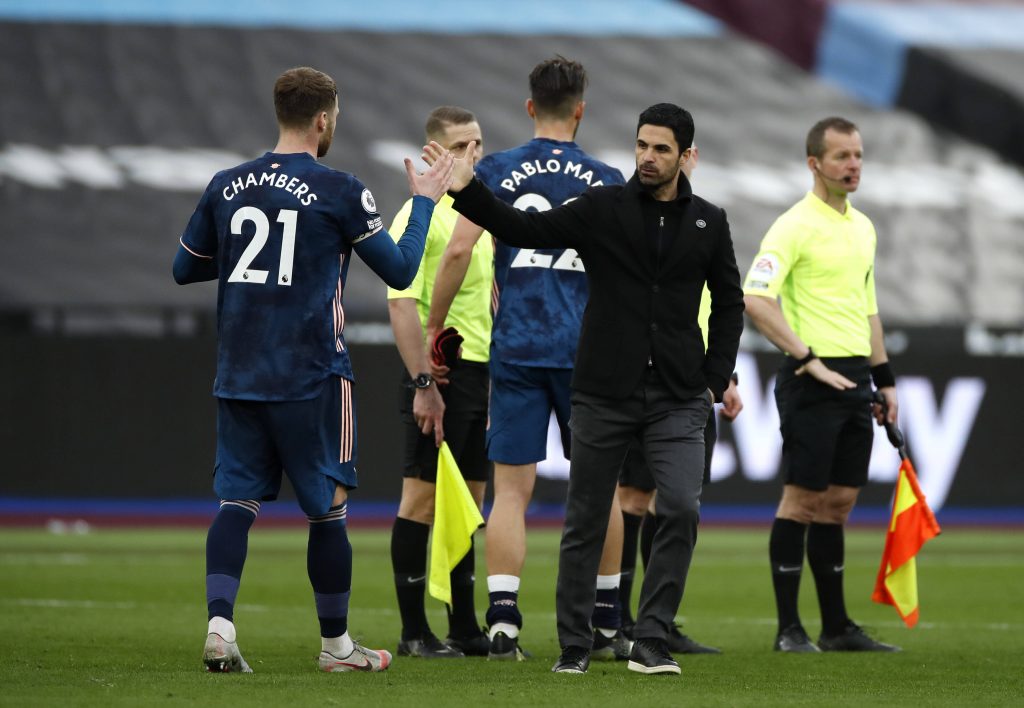 A selection of Arsenal fans on Twitter were delighted with the performance of Calum Chambers during yesterday’s 3-3 Premier League draw at West Ham United.

The Gunners made a dreadful start to the London derby, going 3-0 down by the 32nd minute after goals from Jesse Lingard, Jarrod Bowen and Tomas Soucek.

However, they managed to make a terrific comeback. Soucek scored an own goal before the interval as he deflected Alexandre Lacazette’s strike into the back of the net.

Chambers played a key role in the lead-up with the cross for Lacazette. The England international also contributed to the Gunners’ second goal at the hour mark.

He rifled in a cross from the right flank for Pierre-Emerick Aubameyang, but Craig Dawson scored an own goal trying to clear his lines ahead of the Gunners captain.

Lacazette eventually salvaged a point for the Gunners with a powerful, towering header in the 82nd minute after a loopy right-footed cross from Nicolas Pepe.

Despite the Frenchman’s efforts, Chambers was named the man of the match after attempting eight crosses and managing six clearances.

He also registered three key passes and made a vital interception before the equaliser to deny Jesse Lingard what would have been a tap-in from two yards out.

Kieran Tierney has been the Gunners’ best full-back this season, but Chambers outclassed him with a good attacking performance from the right-back role.

Some of the club’s faithful were delighted for the England international, who made only his second league appearance since recovering from a serious knee injury.

So impressed with Calum Chambers today, superb going forward. That’s the best performance from him in an Arsenal shirt for years 👏 pic.twitter.com/vr2bOiIzGw

Let's talk about how Calum Chambers was our best full back today. For a player not very blessed with pace, the way he gets into good crossing positions is incredible. Then, his crosses😍😍😍

Chambers had a slow beginning to the game, similar to his teammates, but made amends with some delightful crosses into the box.

He was unlucky not to register an assist, but it was a promising display from a player who seemed out of contention under Mikel Arteta.

Chambers hardly played for the Gunners after his return from injury in December, but he has now started two of the last three league games.

He is likely to keep his place for the Liverpool clash but needs to stay consistent with the competition from Hector Bellerin and Cedric Soares.

Bellerin has not featured in four league games in a row, which is likely to pose doubts over his future beyond the summer.

He has been linked with a possible return to Barcelona. Chambers, meanwhile, will be hoping to earn a new contract beyond June 2022.

Read: ‘He is a real character’: Mikel Arteta praises this Arsenal star after West Ham draw.