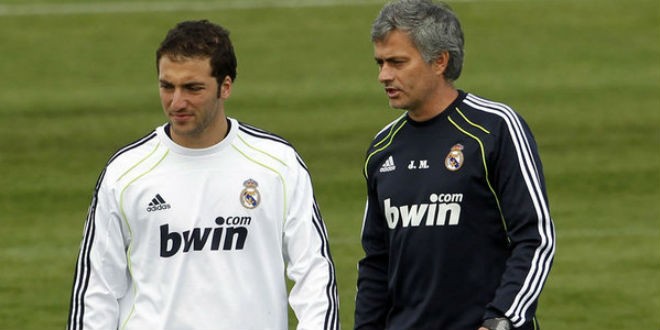 Following former Real Madrid manager Jose Mourinho re-joining his old side, it was to be expected a number of Madrid players would be linked with potential transfers to the Premier League outfit.

Want-away striker Gonzalo Higuain has reiterated his desire to leave the La Liga side this summer – citing he wanted a new challenge. However, many felt his qualms with the club stemmed from Jose Mourinho’s involvement.

It initially seemed unlikely Chelsea were ever in the market for the Argentina international, but Higuain himself has admitted Mourinho wants him at the side for the coming season.

The 25-year old has a £25M asking price on his head. London rivals Arsenal were expected to be the next destination for the striker, but the deal has seemingly broken down due to ongoing negotiations about the asking price.

Real Madrid president Florentino Perez has denied there has ever been an offer from any side for Higuain this summer, but a number of clubs are said to be interested in procuring his signature.

Last season’s La Liga runners-up have also said they want to hold onto the Argentine by all means. Scoring 122 goals in 262 games for the Spanish side, Higuain is still highly thought of at Madrid and will be heavily persuaded to remain this summer.

Whether or not Chelsea will actually make an official bid remains to be seen. Mourinho had only recently said his only transfer target this summer was Wayne Rooney, and the club were going for broke to secure his transfer.

The Portugese manager has never hinted he’s ever wanted to sign any Madrid players over to Chelsea this summer, but Mourinho is a man of mystery.

The coming week will be telling if Chelsea make a formal approach for Higuain, or if they leave him be.