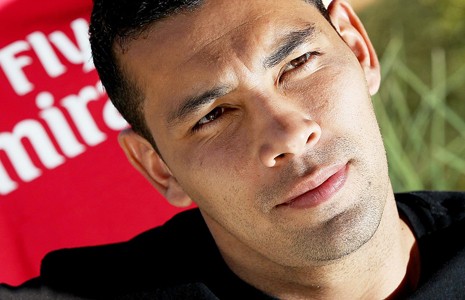 Arsenal defender Andre Santos returned to Brazil to play with Gremio for the reminder of the season but claims his future still remains at Arsenal.

Santos was signed from Turkish club Fenerbahce for a reported fee of £6.8m in the summer of 2011, but has failed to make a bright impression having made just 13 Premier League starts for the Gunners.

Left-back Keiran Gibbs is Arsene Wenger’s first choice left back while the 29-year-old is expected to drop down the pecking orders at the club after the signing of Nacho Monreal on January deadline day for a fee in the region of £10.5m.

Many thought that Wenger would keep him in the side, after Gibbs got injured, but the Frenchman decided a loan move from Santos is ideal for everyone. While many would also suggest that his departure from Emirates brings an end to his Arsenal career, the player insisted that Wenger wants to keep him. He said as quoted in the press:

“The idea is to go there, play well and be able to come back strong. Do I have a future at the club? For sure. This is a loan deal and after this season we will see where everything stands.”

“I wish things could have worked out better. I started very well, got injured a couple of times and I have not been able to get back to my best form.

“Things did not work out as well as I expected. I am not satisfied. Hopefully, when I am back, I will be on top of my game and then I will be able to help the team the way I want to.”

Santos says he is privileged to be a part of Arsenal team and wants to see off his contract at the club which has still two-and-a-half-year left to expire. He admitted that with the signing of another left back it became clear to him that he won’t be getting regular opportunities and thereby decided to move to regain the confidence back.