Arsenal have a great opportunity to close in on qualification to the second round of the UEFA Champions League over the next two games as they face arguably the weakest team in the group.

Arsène Wenger’s have made a poor start to the season by their standards, with only two wins from their opening eight Premier League games. Victory over Galatasaray in their last Champions League outing has at least set them up nicely for the coming fortnight.

Anderlecht should not be written off with their experience in the competition in recent years but they have not been picking up the results – three days and six defeats in their last nine. They were thrashed 3-0 at home by Borussia Dortmund in their last group game.

Fabrice N’Sakala is out until November. Anthony Vanden Borre is yet to feature for the Belgian side this season after tearing his calf during the World Cup.

Wojciech Szczęsny is suspended following his red card during Arsenal’s thrashing of Galatasaray in the last game.

Defenders Laurent Koscielny and Mathieu Debuchy are also injured. Calum Chambers was suspended in the Premier League at the weekend but will likely go into the defence on Wednesday with limited numbers available.

Theo Walcott is not yet back from his long layoff, whilst Mesut Özil and Olivier Giroud are out for the long-term. Striker Yaya Sanogo is also still sidelined. 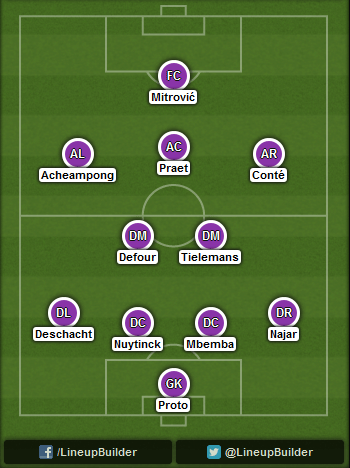 Nine of the outfield players have started both of Anderlecht’s group stage matches and all of them are available to manager Besnik Hasi on Wednesday. We think he’ll play one up front against the English opposition. 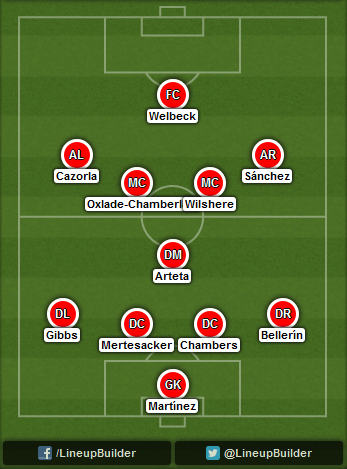 Calum Chambers should move into centre-back in place of Nacho Monreal who started there at the weekend with Laurent Koscielny injured. Mikel Arteta will surely replace Mathieu Flamini in front of the back four. The four supporting midfielders to Danny Welbeck are all creative but could do with helping the England international find the back of the net.

Alexis Sánchez vs Olivier Deschacht
Alexis Sánchez lining up down the right wing has often been a good matchup for Arsenal this season and Wednesday should be no exception. 33-year old Olivier Deschacht has looked a weak point in the defence for Anderlecht in the Champions League and has resorted to a number of fouls. The Chilean should have the beating of the experienced Belgian down the right wing.

Danny Welbeck vs Bram Nuytinck
Attack is the best form of defence and with Arsenal looking vulnerable at the back they need the best out of their attack in this match. Danny Welbeck scored a hat-trick in the last game with Galatasaray playing a high line. Anderlecht would be foolish to employ that tactic but even if they don’t the England international should fancy his chances against either the Belgium side’s Dutch centre-back or his partner Chancel Mbemba.

Aleksandar Mitrović vs Calum Chambers
Anderlecht’s young striker is their top scorer in the Belgium Pro League so far this season having scored five goals in 11 appearances. That’s one more than Matías Suárez who has been a substitute more often than not this season but the Argentine should not be ruled out of starting or featuring in this game. Arsenal’s defence conceded two at home to Hull City at the weekend and that was with their first-choice goalkeeper. With their third-choice playing on Wednesday the home side should fancy their chances.

Prediction: Anderlecht 1-3 Arsenal
Arsenal were held at home by Tottenham before they stuffed Galatasaray in the Champions League the following Wednesday. Anderlecht aren’t in any kind of form themselves – losing to Dortmund before drawing their last two league games, against Genk and Mechelen. There’s certainly concerns over the English side’s defence but going forward they should have enough to pull off a victory.