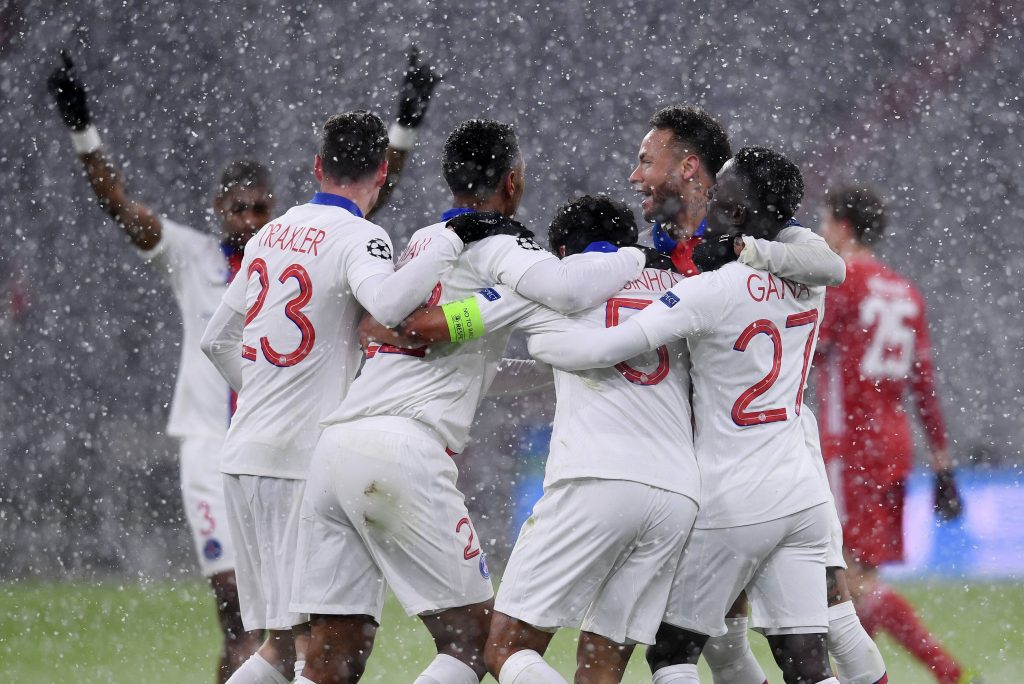 A clinical Paris Saint-Germain came away from the Allianz Arena with a one-goal advantage in an enthralling Champions League quarter-final first leg on Wednesday.

It was an electrifying start to the game. Eric Maxim Choupo-Moting, standing in for the injured Robert Lewandowski, saw his second-minute header strike the crossbar from Joshua Kimmich’s corner.

It was a miss that proved costly, as the visitors took the lead just a minute later. Neymar picked up the ball in the middle, drove forward, and slipped it through to Kylian Mbappe.

The young Frenchman slammed into the back of the net, although goalkeeper Manuel Neuer would have been disappointed to let it go through him.

Bayern Munich responded well to the goal and really should’ve equalised on the tenth minute, but Thomas Muller struck straight at Keylor Navas from close range.

The Bavarians suffered another scare shortly after when Julian Draxler found the net, but Mbappe was marginally offside in the build-up, and the goal was chalked off.

The hosts continued to press for an equaliser. Leon Goretzka saw his close-range header saved by Navas before the Costa Rican produced again to deny Benjamin Pavard’s low drive.

Not long afterwards, PSG found a second goal. Neymar swung in a fantastic cross for Brazilian compatriot Marquinhos, who controlled and calmly slotted into the far corner.

This was his last contribution of the game, as he went off with an injury almost immediately afterwards.

Hansi Flick’s men managed to halve the deficit before the break. Pavard’s cross from the right found Choupo-Moting, who planted his header into the bottom corner.

The second half continued in a similarly exciting fashion. Neymar went through on goal but was denied by Neuer, and David Alaba had a shot saved by Navas.

Of course, it wasn’t long before the next goal, and it was the German side that got it. Kimmich’s free-kick was glanced into the bottom corner by the head of Muller, drawing the scores level.

Just as Bayern Munich were pressing to take the lead, they got hit on the counter-attack again. Angel Di Maria fed Mbappe with a pass, and the Frenchman did the rest, excellently sliding the ball in at the near post through the legs of Jerome Boateng.

This was his sixth goal of the Champions League knockout stage and his eighth in the tournament.

The home side continued to fight for another equaliser but could not find the net for a third time. Alaba came close twice, and Muller scuffed a shot wide.

The game ended 3-2, with Bayern Munich suffering their first Champions League defeat since their home loss to Liverpool in 2019. The Bundesliga side will now need to score at least two goals at the Parc des Princes in the second leg on April 13.

Man of the Match – Neymar

This could have easily gone to his partner in crime, Kylian Mbappe, but more on him later.

Mauricio Pochettino’s side were on the back foot for most of the game, so they needed to make the most of every time they went forward. Thankfully, Neymar helped them do exactly that.

The Brazilian is a highly divisive figure in football, but the opening two goals showed exactly why he’s one of the best players in the world. For the first, he drove forward from deep and showed great composure to slip in Mbappe, who did the rest.

His second assist was even more impressive, picking out an inch-perfect pass for Marquinhos to finish.

It was a tough night for the Bayern Munich backline, and if the forward can produce another stellar display in the reverse fixture, it should see his side through to the semi-finals.

Mbappe is one of football’s very best young players and has been touted alongside Erling Braut Haaland as the heir to Lionel Messi’s and Cristiano Ronaldo’s throne.

The 22-year-old is widely expected to win a Ballon d’Or at some point, and it may come sooner than most think.

He was already one of the early frontrunners for the prize, along with Messi, Ronaldo, Haaland and Lewandowski. His performance at the Allianz Arena will have established him as the favourite.

From 2007 onwards, the Ballon d’Or has either been won by a player who won the Champions League or was the competition’s top scorer. In fact, all of the last 13 winners have got to the semi-finals at the very least.

In contrast, five of the last eight winners did not win their domestic leagues. To put it simply, the Champions League matters more than anything else when it comes to the Ballon d’Or.

Messi and Ronaldo have already been knocked out, and Lewandowski and Haaland are also looking unlikely to reach the next round. This already gives Mbappe a huge advantage over the rest.

Furthermore, scoring six knockout goals in three games against two of Europe’s biggest clubs will do absolute wonders for his case.

This summer’s European Championships and the Copa America could make a difference. However, Mbappe plays for the current holders of the World Cup, so he shouldn’t need to worry too much in that department.

And, ultimately, the Champions League will take precedence over international competitions in the Ballon d’Or race.

Ronaldo won the award in 2014 despite crashing out in the group stages of the World Cup, while Messi got to the final and won the Golden Ball. Similarly, the Argentine won in 2010 and 2011 despite failing to score in either tournament.

Barring a second-leg comeback from Bayern Munich, it’s looking like the youngster could be about to win his first (but probably not his last) Ballon d’Or.