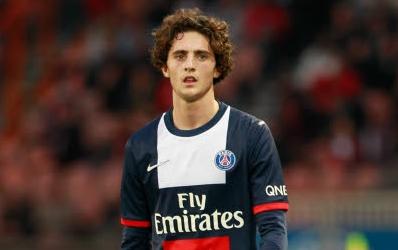 Paris Saint-Germain midfielder Adrien Rabiot seemed to have cleared all doubts about his future in the French capital by signing a contract extension at the Parc des Princes. After a summer full of speculation, with Arsenal being very interested in signing the 19 year-old, the heat had died down on Rabiot recently.

Reports today though, from Italian daily, Il Tempo, have sensationally claimed that the Frenchman is close to agreeing a deal with Arsenal’s fierce North London rivals, Tottenham Hotspur. After signing a contract with PSG until 2019, this news comes as a real shocker.

Rabiot is one of the most sought-after players in Europe today, and even though he has hardly played much in Ligue 1 this season, it wasn’t expected that PSG would let him go. The French champions are already in danger of non-compliance with UEFA Financial Fair Play (FFP) rules, and investing their faith in youth is something that was deemed necessary.

Arsenal have huge injury problems in midfield, with Mesut Ozil, Mikel Arteta and Jack Wilshere all facing long-term lay-offs. Losing Rabiot to Spurs will be something that their fans will find hard to digest, especially with Arsene Wenger already coming under some harsh criticism with regards to his stingy spending.