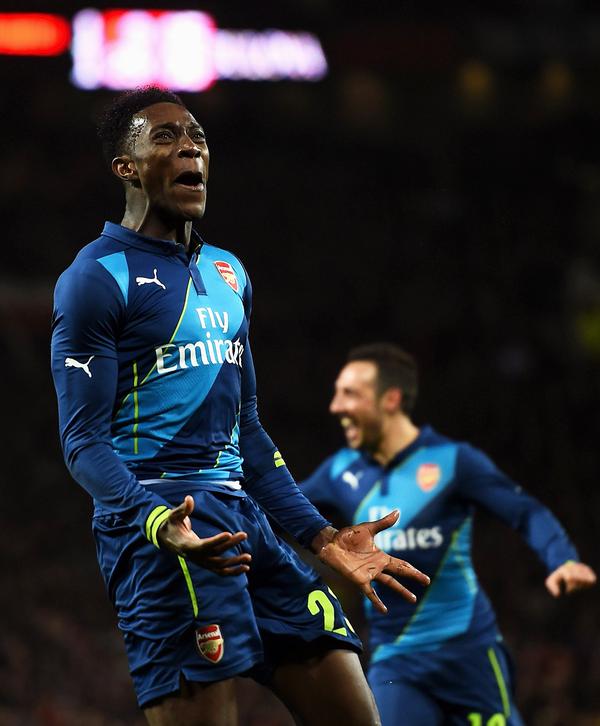 Arsenal booked their fourth trip to Wembley in the space of 12 months with a 2-1 victory at Old Trafford last night.

Danny Welbeck scored the winner versus his former side as the Gunners were relatively comfortable winners in the FA Cup quarter-final tie.

Louis van Gaal can expect to face fan pressure over the final 10 games of his season as his expensively-assembled squad face a battle to finish in the top four as they look to save their season.

Here are five things we learned from Manchester United 1-2 Arsenal:

Wayne Rooney has had to feast on scraps over the past couple of games. Yes, Ángel Di María picked him out with a perfect, deep cross for United’s equaliser on half hour. Trying not to discredit the pair, it was schoolboy defending from Arsenal – the Argentine winger had all the time and space in the world to pick his striker out, whilst Rooney was left open by Laurent Koscielny. Other than the, Di María had one opening from a tight angle in the first half but otherwise Wojciech Szczęsny had a comfortable evening in the Arsenal goal.

A man of the match display in Arsenal’s victory over Manchester City earlier this year and a candidate for that award again last night. Young Francis Coquelin is proving his worth to Arsène Wenger with his solid displays in front of the back four. Had no blame in goal as it came from down the wing and around the six-yard box, he shut out Marouane Fellaini’s threar in the second half. Coquelin also broke up play in the centre of midfield without conceding free kicks. Definitely an upgrade on both Mikel Arteta and Mathieu Flamini right now. Is he Arsenal’s long-term fix though?

Antonio Valencia is Not a Right-Back

Antonio Valencia at right-back has been the most consistent selection in Louis van Gaal’s defence this season. Yet, the winger is not a defender as was clear for all to see last night. The Ecuadorian was caught and pulled out of position a number of times during the game – most notably for Arsenal’s opener that allowed left-back Nacho Monreal all the time and space in the box to score his goal. There were other examples of this during the game where Valencia was fortunate United didn’t concede another. We won’t rub it in about setting up Danny Welbeck’s winner…

Marouane Fellaini is Not a Top Four #10

With Robin van Persie injured and Radamel Falcao currently out of van Gaal’s plans, Marouane Fellaini has found himself supporting Wayne Rooney recently. To be fair to the expensive David Moyes signing, he does put a shift in. But where Chelsea have Eden Hazard, Oscar and Cesc Fàbregas, where Manchester City have David Silva and Sergio Agüero, where Arsenal have Santi Cazorla or Mesut Özil, where Liverpool have Philippe Coutinho and Tottenham have Christian Eriksen, Marouane Fellaini is not in their league. He’s a plan B to bring down and flick on high balls, but he’s not a playmaker or match winner. Why is Juan Mata being overlooked when United need a playmaker?

Arsenal Are Not a One-Man Team

Earlier this season many opposition fans were claiming Arsenal to be a one-man team with Alexis Sánchez supposedly winning them all of their points. The Chilean wasn’t heavily involved last night, and certainly not in either of Arsenal’s goals. He hasn’t been involved in too many goals over the past month or so in truth. But Arsenal are still picking up the points. They have match winners in Olivier Giroud, Santi Cazorla, Mesut Özil, can still call upon Alex Oxlade-Chamberlain and Theo Walcott, and last night, Danny Welbeck won them the match.