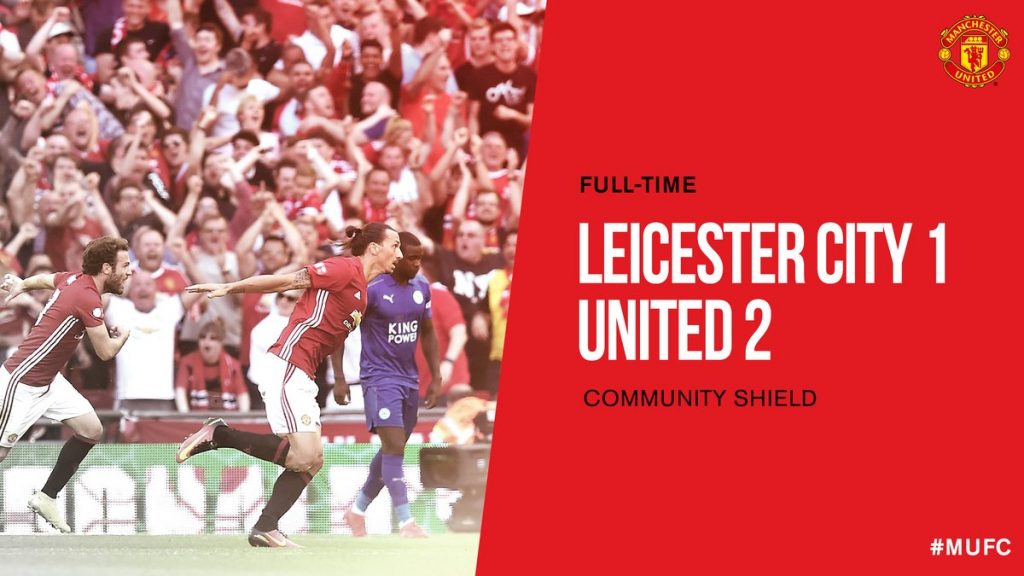 Jose Mourinho starts his Manchester United tenure with a trophy after the Red Devils beat Leicester 2-1 to win the Community Shield on Sunday at Wembley for the 21st time in their history.

United took the lead at half time through a brilliant solo finish from Jesse Lingard. Jamie Vardy pounced on an errant backpass pass from Marouane Fellaini to restore parity after the break. In the 85th minute, Zlatan Ibrahimovic sealed the victory for United with a brilliant header.

Despite the victory, it was a disjointed performance from United. Midfield is one area that has been neglected for years, with United failing to land a like-for-like replacement for ex-skipper Roy Keane since he left the club in 2005. United midfield looked lethargic with Michael Carrick and Marouane Fellaini in the middle while Wayne Rooney couldn’t offer assistance when deployed in the hole.

Does arrival of Pogba make ManUtd even more top-heavy? No one to really control MF with real authority in front of back four.

Pogba may not be the final solution for United but at least he will bring control and dynamism in the middle of the park. United need a midfielder who is energetic and daring to carry the ball to the final third and create opportunities, although it makes the game far too open and unpredictable.

Eric Bailly is raw but a solid defender

New signing Bailly impressed everyone with his solid defending. He is bold, courageous and not shy of making challenges. He executed a number of perfectly timed tackles in his own half and gave the impression of a player who could have a bright future at United. At the same time, he is inexperienced and has a few rough edges to his game.

The importance of Zlatan Ibrahimovic

The Swede striker was largely anonymous for the first 82 minutes but his last touch of note was the winning goal for United. He has always been a big match player and while he may not have the legs to stamp his authority throughout a game, he is still good enough to win matches for his side. Liam Canning summed his importance brilliantly:

Manchester United have lacked a proper aerial threat in a striker for some time, Ibrahimović now gives them that. A brilliant option.

What to do with Wayne Rooney

Rooney looked lacklustre throughout the game and failed to link up properly with Ibrahimovic. He deserves the love-in he receives and probably will become United’s all-time record goal scorer as well but is he holding United back? He is lacking the sharpness for competitive matches and probably using him sparingly is the best solution for United at the moment.

Leicester will do well again in the Premier League

Despite the Community Shield defeat, and a string of poor results in pre-season, Leicester will still do well in the Premier League. They looked solid in defence and created some dangerous chances upfront against United.

Well, it is highly unlikely they would challenge for the title again but the Foxes are well equipped to finish within top 10. With Vardy and Mahrez around and a couple of good signings before the transfer slam shut, Leicester can even think of a top six finish as well.