After suffering defeat at the hands of arch rivals Manchester United on Sunday, further pressure was mounted onto the shoulders of Liverpool manager Brendan Rodgers. This was followed on Wednesday with what appeared a tricky quarter-final tie away to high flying Championship side Bournemouth in the League Cup. The Reds comfortably won 3-1 making their way into the Semi-finals to face Chelsea.

This weekend Liverpool meet an Arsenal side who are experiencing an inconsistent run of form. The North London club has won three of their last six league matches but have lost the other three. However, the stats for each of the two sides over the first 16 games of the season weigh heavily in Arsenal’s favour. 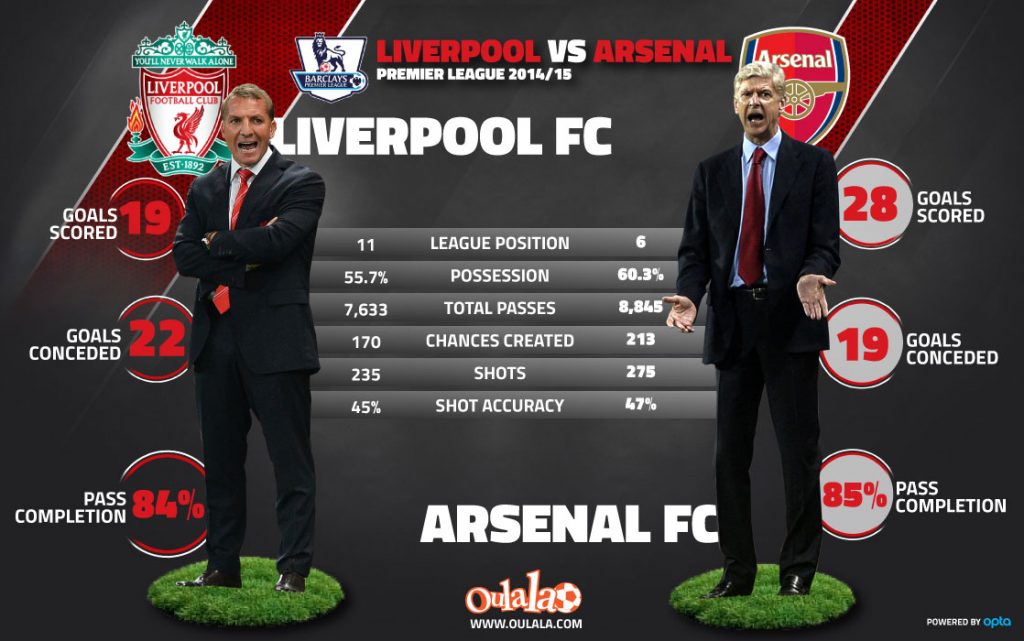 Opta powered fantasy football game www.oulala.com have collated the data and the Gunners come out on top in all eight of the major criteria despite only leading the Reds by five points in the Premier League table. As a major importance to their style of play it is no surprise that Arsenal control almost 5% more of their games in possession. This would explain their added dominance in passing with an average of 75 more passes made per game, yet Arsenal only edge Liverpool for actual pass completion by just 1%.

It has been reported that Alex Oxlade-Chamberlain is ‘almost certain’ to be passed fit to take on Liverpool, he was previously a doubt after aggravating a groin injury. The Reds are likely to be without right-back Glen Johnson after he suffered a groin injury of his own in the defeat to Manchester United.

Last season the sides met three times with Arsenal winning the league and FA Cup meetings at The Emirate’s Stadium and Liverpool coming out on top at Anfield 5-1.

This season’s stats suggest that Arsenal will start as the strong favourites, on paper at least.