The former Toulouse midfielder would cost around £15m and going by the media reports, Arsenal have shown heavy interest in him of late. It remains to be seen whether the North Lonsoners at all make a move for him, but there’s hardly an iota of doubt that he would be a quality addition to Wenger’s side.

Need of the hour – a complete midfielder

It has been oft repeated this season that Wenger needs to sign a quality central midfielder. Ideally the Gunners should be looking for a top defensive midfielder, but in Sissoko Arsenal will get a complete package, leading to long term benefits.

Sissoko is a typical box-to-box midfielder who is physically strong and possesses a deadly pace. Bubbling with energy all day long – he is a tireless runner, good tackler, decent passer and tactically smart – all in one under a good footballing cerebra.

Ever since the days of Gilberto, Edu and Vieira, Arsenal have lacked that physical bite in the middle. Sissoko, adept in the holding role and playing forward, would bring the much needed flexibility and defensive solidity that Arsenal lack at the moment.

Sissoko is versatile enough to play in multiple positions and perform multitude roles – be it as holding midfielder or anywhere in the forward zone – he performs any particular assigned role with great aplomb. He is that comfortable with ball on his feet.

Keeping aside all the stats, however, what Wenger should be particularly looking at is his physical fitness. You may find it funny, but the truth is, Arsenal have the worst injury record in the league, and frustratingly it has been going on for the past 5-6 years. Even this season, Arsenal have had to deal with rigorous injury issues, with midfield being ravaged from time to time. Now take a look at this and you’ll understand why it is so important to have someone in the midfield who has consistently played over 30 league games every season for the last 3-4 years. 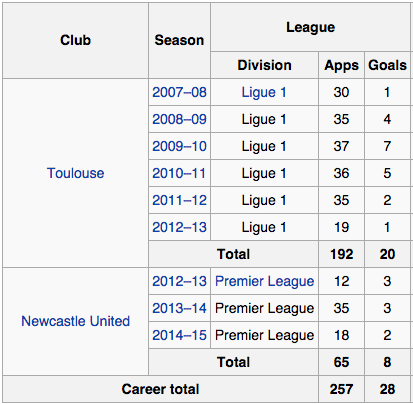 Having already played for two and a half seasons in the Premier League for Newcastle, Sissoko is now ready and comfortable enough to challenge himself for pursuing higher ambitions, read as playing at a top club like Arsenal. In his case, he would hardly face difficulties in adjusting to the new situation. Having a French speaking boss at helm and other French international team-mates around, settling down at Arsenal should be his least concern.

Sissoko has been outstanding for the Magpies over the past two seasons. Not only has he made more key passes (98) from open play in the PL since August 2013, in terms of creating chances, he is only behind the likes of Hazard, Sterling and David Silva in the league, via whoscored. Likewise with 11 clearances and 10 interceptions, he has put in a commendable defensive shift for the Tyneside outfit. 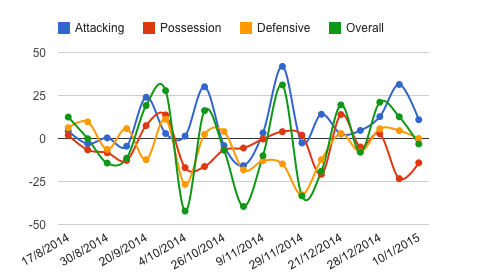 In an interview with French media Telefoot, via Gary Jacob of The Times, Sissoko has expressed his love for the Gunners.

It is always good to have players who bore this desire to play for a certain team and Arsenal should be looking to exploit that situation. And most importantly, he would be available for £15m, and the value could drop once the negotiation gets underway.

Sissoko might not represent the shiny toy in the market that every fans love to see, but at that price, he is a safest bet Wenger can have in the January transfer window. Wenger has always stated that he would only sign the right player at the right price. It remains to be seen whether he considers Sissoko as the right fit for Arsenal or not.