Now former Southampton midfielder Jack Cork has agreed personal terms with Swansea City, and will be available for their game against Sunderland next Saturday.

The English midfielder, who made 109 appearances for Southampton, will join up with Garry Monk and his squad as they look to retain a place in the Premier League’s top ten.

A Tweet from the official Swansea City Twitter page reads: “We are delighted to announce the signing of @SouthamptonFC midfielder @jackcork1 for an undisclosed fee.” 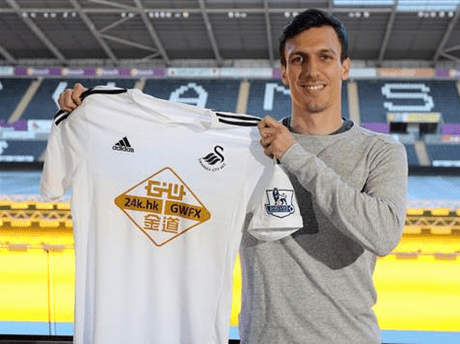 Cork, 26, joined Southampton from Chelsea in 2011 after having loan spells at Bournemouth, Scunthorpe, Southampton, Coventry and Burnley before the Saints decided to resign him on a permanent basis.

He expressed his delight in joining the Welsh club to their official website:

“Swansea are a good footballing team who have been very successful over the last few years. “It’s a team I’ve always looked at and admired, so for me to play in this team is a privilege. “The style, the large core of British players and a manager who’s hungry to do well made it an easy decision to come here.”

Cork has struggled for first team football under new boss Ronald Koeman, and admits that this played a huge part in his transfer to the Swans:

“It had come to the point where myself and the club had gone as far as we could go. The opportunity of a new challenge at Swansea is something I’m looking forward to.”

Alan Cork, father of Jack, managed the Swans for the majority of the 1997/98 and although he didn’t have much success, the defensive midfielder made it clear that his dad has only good things to say about his time in South Wales:

“I spoke to my dad before I came here,”  he said. “It didn’t end up too well for him here, but he had nothing but good things to say about the club and area.”

Cork is Swansea’s fourth signing of the month with Matt Grimes and Kyle Naughton both joining on permanent deals, while Nelson Oliveira is signed on a loan deal for the rest of the season.