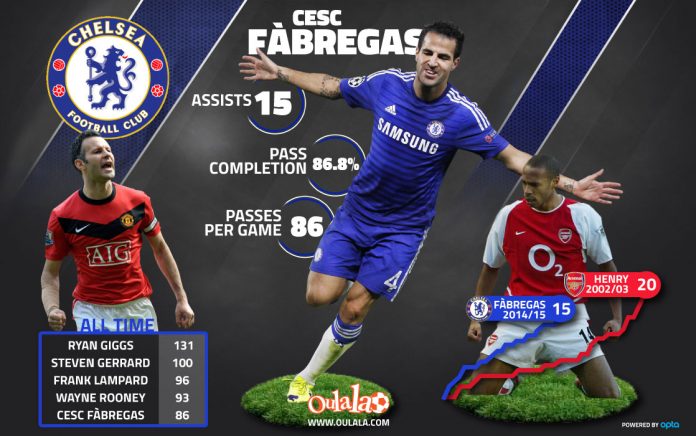 The guys at Opta powered fantasy football game www.oulala.com have taken an in-depth statistical look at the midfielder’s return to the Premier League.

In Chelsea’s 5-0 dismantling of Swansea City at the Liberty Stadium on Saturday, midfielder Cesc Fàbregas notched up his fifteenth league assist of the season and became the first player in Premier League history to provide 15 assists in two seasons (2007/08 and 2014/15).

Fàbregas’ assist for Diego Costa’s 20th minute goal put the midfielder just 2 behind his personal best of 17 assists in 2007/08 for Arsenal and just 5 behind Thierry Henry who holds the record of 20 assists in the 2002/03 season. After 22 games in the 02/03 campaign Henry had just 7 assists, less than half what Fàbregas currently has. If the Spaniard continues at the same rate, he is on track to total a remarkable 26 assists by the end of the season, a figure that would blow his ex-teammate’s record clear out of the water.

The 27-year-old currently sits fifth in the all-time table for Premier League assists on 86 behind Wayne Rooney [93], Frank Lampard [96], Steven Gerrard [100] and Ryan Giggs who holds the overall record with 131. Fàbregas is on course to surpass Giggs’ tally by the time he is 31 and break yet another record.

His breathtaking return to English football will not please one man in particular, Arsenal manager Arsene Wenger. Fàbregas spoke of his discussions with the Arsenal coach about a return to his old club last summer and was told that he was not needed by the Frenchman as the position was already covered by Mesut Özil.

The German midfielder has only played 7 games this season after suffering a knee injury and is still yet to find his Real Madrid form since he arrived in the Premier League. To further emphasize the mistake that Wenger made in not welcoming Fàbregas back to the Emirates is the fact that the Chelsea midfielder has more assists this season than the combined tally of Arsenal’s main creative quartet – Alexis Sánchez [7], Santi Cazorla [4], Aaron Ramsey [2] and Jack Wilshere [1] – a total of 14.

Cesc Fàbregas is arguably the best midfielder in the world at the moment based on his stats this season.

Has he been the Premier League’s Player of the Season so far?