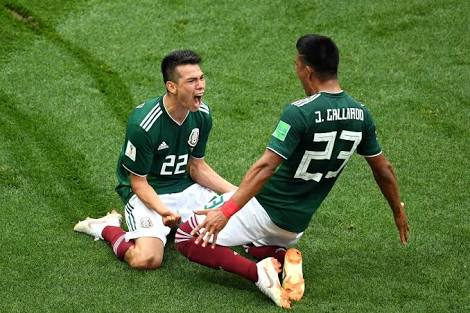 Four days into the footballing festival that is the 2018 World Cup and it has been a thoroughly enjoyable experience, with thrills, spills and upsets so far.

Today’s news focuses on perennial heavy-hitters Brazil and Germany not having it their own way and the fallout from their Sunday results.

With day five having three games, England enter the tournament and are looking to change their image.

World Cup holders Germany were given a rude shock in their Group F opener, with the European powerhouses defeated 1-0 by an impressive Mexico side on Sunday.

A well-worked Hirving Lozano goal in the first-half proved to be the difference between the teams, as Joachim Low’s men were uncharacteristically open at the back.

Mexico will be eyeing progression through to the next round, while Germany have work to do in their efforts to be involved in the round of 16.

With games against Sweden and South Korea still to play, Low is not panicking after an opening round defeat.

“We will make it to the next round,” the Germany boss said.

“We will certainly not change our match plan. If we are able to play out our ideas then we have the players who are able to deliver.

“We will not just break apart now and become headless and do something completely different. There is no need to break out in panic just because we have lost a match.”

Fellow Group F sides Sweden and South Korea face each other on Monday.

Brazil are many people’s favourites to win the tournament given their attacking talent but the South Americans were held to a 1-1 draw in their Group E opener against Switzerland.

After a sublime Philippe Coutinho strike gave the Selecao the lead, Steve Zuber headed home in the second half to ensure the spoils were shared.

VAR was thrown into the limelight once more, with the Swiss scorer seemingly fouling Brazil defender Joao Miranda to net – but this was not picked up.

Coach Tite was not best pleased.

“The Miranda moment was very clear,” the Brazil manager said.

“I will also say this – Miranda said to me: ‘Well, when he pushed me, I should have fallen over’, but I said: ‘No, absolutely not. Don’t simulate anything. Don’t draw a foul otherwise it will look like you are trying to do so.'”

In the other Group E match, an excellent Aleksandar Kolarov free-kick gave Serbia a 1-0 win over Costa Rica.

England open their World Cup campaign with a Group G clash against Tunisia tonight, with the Three Lions hoping to buck a poor track record of opening games at tournaments.

While there have been relatively limited expectations in the build-up to the competition, excitement over this side has reached fever-pitch ahead of the clash against the North Africans.

One of the reasons why is Gareth Southgate’s insistence on England playing expansive, brave, attacking football – something he hopes will change the way the national side is perceived.

“I’m looking forward to watching the lads play because of the way they’ve trained and the way they played in the two matches leading in,” he said.

“We seem to be improving every time. The patterns of play are becoming more apparent and I like the movement and the way we’re shifting the ball.

“I feel we’re creating a good team and a team the players want to work in as well. It’s very satisfying to see that progress.”

In Group G’s other match, Belgium will face Panama.

Are you predicting correct scores at this World Cup? Join the Sportslens Predictor competition to stand a chance of winning a 50-inch television.