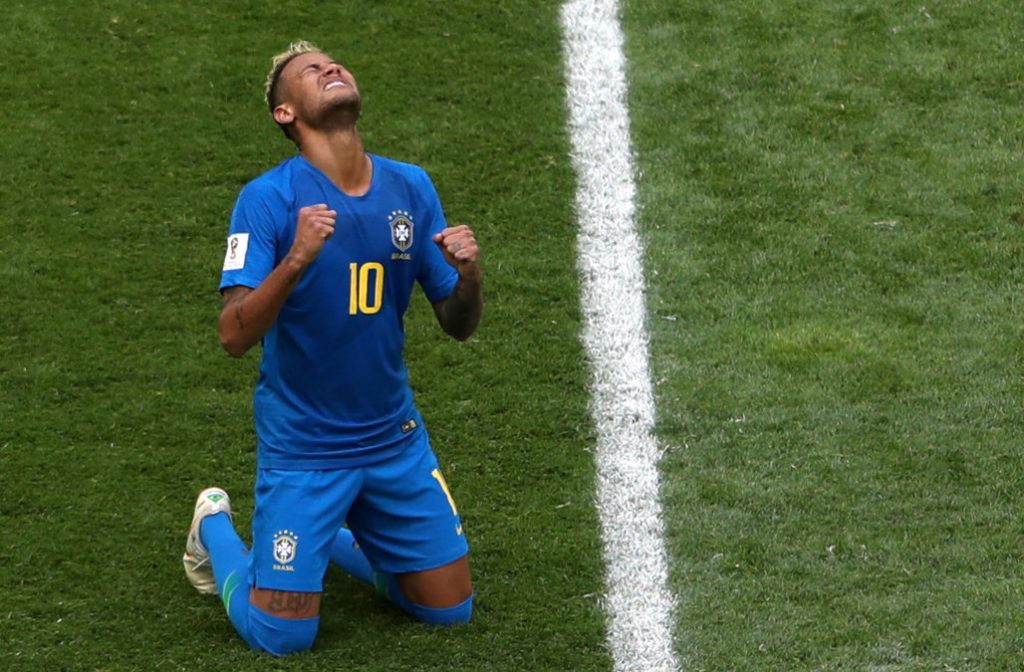 As we head into an exciting weekend of World Cup 2018 action, Friday’s games provided no shortage of controversy and quality.

Brazil left it late to beat a dogged Costa Rica 2-0, while Switzerland defeated Serbia 2-1 with a last-minute Xherdan Shaqiri goal.

Finally, with Nigeria beating Iceland 2-0, the potential for Argentina to make the round of 16 was reopened.

After drawing their opening game 1-1 against Switzerland, pressure was on Brazil to record victory over Costa Rica on Friday – with anxiety growing as time ticked on and the score remained 0-0.

However, Philippe Coutinho proved the hero, breaking the deadlock in injury time before Neymar added a last-gasp second.

The PSG attacker was at the centre of controversy, with the referee initially giving a penalty in Brazil’s favour but revoking it after a VAR assessment due to Neymar over-reacting to a Costa Rican challenge.

Selecao coach Tite admitted his star man was still recovering from a foot injury and was not yet at his best.

“He is resuming a process,” the Brazil manager said.

“He played the full match. He is a human being, he needs some time to resume his high standard. Before then there is a team that has to be strong and not depend on him.”

Elsewhere, in a politically charged fixture, Xherdan Shaqiri’s 90th minute strike means Switzerland look very likely to make it into the round of 16 after a 2-1 win, while Serbia now need a result against Brazil.

Iceland had an excellent chance to put one foot into the next round but came up against a determined Nigeria outfit in Group D, with the Africans prevailing 2-0 thanks to a Ahmed Musa second-half double.

Gernot Rohr’s men were second best in the first 45 but used their power and pace after the break to record a well-deserved win. Gylfi Sigurdsson missed a penalty to compound the Scandinavians’ woes.

The result means that Nigeria will know they are through to the next round if they beat Argentina in the final group game, but the opposite result could also send the South Americans through if Croatia defeat Iceland.

However, Argentina’s 3-0 loss to Croatia on Thursday night means the current goal difference does not favour Jorge Sampoli’s men.

England are back in action on Sunday against Panama and are sweating on the fitness of Dele Alli, who picked up a quad injury in their opening win over Tunisia.

While Ruben Loftus-Cheek is widely expected to replace the Tottenham attacker in the Three Lions’ line-up, Sky Sports suggest the first-choice forward has a ‘slim chance’ of making the starting XI.

England will go into their game on Sunday knowing what they need to do against Panama after seeing Belgium and Tunisia face each other later today.

In today’s most-exciting game, Germany take on Sweden in the late kick-off needing a positive result to get their tournament back on track.

The World Cup holders were uncharacteristically poor against Mexico in their opener, losing 1-0, and as such another defeat could see them eliminated at the first hurdle.

Joachim Low has suggested that despite Germany being second-best last time out, Die Mannschaft would not alter their tactics against Sweden.

“Why should I lose faith with my important players?” he asked.

“My fundamental faith in those players will not be broken because of one game. Of course, one or two might be on the bench, but I trust them because they’re still at a very high level.

“To question these players now would be fatal. Of course I don’t. There is no point questioning our idea. There will be corrections, to address the mistakes, but there’s no doubting our playing style.”

Elsewhere in Group F, Mexico can book a place in the next round with victory over South Korea.

Want to win a 50-inch television? Get your World Cup 2018 tips in at the Sportslens Predictor competition here.